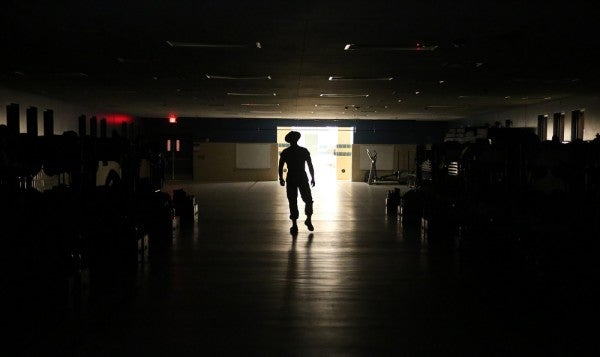 Drill instructors are a recruit’s first real introduction to what it means to be a Marine, and as such, they’re intimidating, impressive, and beyond reproach. Their uniforms are always perfect and they never seem to sleep, eat, drink, or even use the head.

When you’re a recruit they seem downright psychotic.

These are the men and women who subject you to endless hours of incentivized training, or IT, which is another way of saying abrupt bouts of burpees and pushups. They don’t even sound like normal people when they scream at you. It’s more like a distorted croak, so distinctive that it has its own name: the frog voice.

Related: How to survive the first 4 weeks of Marine boot camp

While every Marine knows what it’s like to be a recruit, few know what it means to relentlessly transform civilians into Marines.

As a drill instructor at Marine Corps Recruit Depot Parris Island, South Carolina, Staff Sgt. Thomas Phillips has served in each of these roles and trained eight platoons of Marines during his seven-and-a-half cycles as a drill instructor.

Phillips spoke with Task & Purpose about what it’s actually like to make Marines.

You hear a lot of rumors as a recruit. One that I heard was that some drill instructors sprayed aerosol cans in their mouths to get that frog voice. Is there any truth in that at all?

That frog voice is 100% real. That is strictly from yelling and screaming at the top of your lungs for 18 hours a day, nonstop. … Drill instructors scream so loud — it sounds bad, but I crapped my pants marching a platoon before from yelling.

I had 92 recruits, so you’re talking about four squads about 23 recruits long, marching them. To keep them all in step, you had to yell loud, really loud.

It was kind of funny. I crapped my pants, had to run back to the house, change my pants, came back out, and my senior drill instructor had been marching them and he crapped his pants, so he had to run in there. My third hat, my kill hat is running around yelling at recruits and he comes up to me and says, “Hey man, I just crapped my pants.”

So the whole team, in a matter of 15 minutes, had all crapped their pants from yelling so loud.

And you coughed up blood, too?

It’s very real, blood coming up. … Honestly, the worst thing ever wasn’t waking up at three in the morning, it was getting to work, parking my truck, and walking to the squad bay knowing I had to yell again.

You know you sleep at night and give your voice time to recover, but that first scream is just so painful. I can’t even describe it. It’s horrible. The voice is very real. Very real. The recruits will see it and they’ll understand it because we make them yell and scream and they’re like, “But my throat hurts.”

We’ve talked a bit about that mystique: that image of the drill instructor. Have there been times when it’s been hard to maintain?

We have those little tricks, where if a drill instructor is about to laugh, and recruits will see it, we tilt our heads down and we’ve got that big cover and we pull it over our eyes so they can’t see that smile, or turn around real fast.

For me, the funniest thing and I can’t help it, but if somebody falls down, it’s just funny. We run a lot of places and recruits would trip and stumble and that would always get me. I couldn’t help but laugh.

We do take some pride in not cracking a smile. Especially that third or fourth hat, it’s very serious business. If a recruit makes him smile, he’s probably going to get the business. He’s going to pay for that smile he got to see.

Tell me about maintaining that mystique as a drill instructor, what’s the effect of that?

I just remember as a recruit myself, just talking to my buddies, “Man this guy, he’s an asshole, he never smiles. You know? He sucks. I hate this guy.”

Going along with that. In boot camp we always called them “fuck-fuck games” when drill instructors, instead of IT-ing you, they’d make you do something stupid. Did you ever do that?

Yeah, we’ve got the air station nearby and we have C-130s that take off and we’ve made recruits chase after planes. That’s pretty funny. What else?

So that’s a very good game we have and all that is is teaching the recruits to move fast and make that rack fast and perfectly. I could spend 10 minutes, 15 minutes, and I could have a kid crying just from playing two sheets and a blanket. Easily.

With your fellow drill instructors was there ever an unofficial competition for things like that? Did you ever get together and say, “You won’t believe what I had these guys do?”

Absolutely. So that’s when you know you have a great team.

If another third hat or fourth hat was yelling at a recruit, I was running over, even if he wasn’t my recruit to yell at. It’d be awesome. We would be out there running and screaming, yelling at a kid, and the kid is crying. And of course, we’d run into the house go behind a rack and the wall locker so they can’t see us, and we’d just start laughing. We’d be dying laughing. I love it so much. Only a drill instructor can truly understand how crazy you have to be.

Did you ever play any tricks on the recruits, or any sort of head games?

I used to do crazy stuff. I’d try to run the footlockers in the squad bay from one end to another. I’d jump over trash cans. I’d jump over barriers, just so the guys are like “wow” you know? Any time my senior drill instructor told me I could go home, I would run and dropkick the back hatch. I’d never open it with my hands. It was just that thing I would do.

Sometimes I’d leave and go sit in my car for 30 minutes, then crawl back in a window and sneak back into the squad bay. Those are the headgames. They think you’ve gone home for the day and they go to make a headcall, and you sneak back in and go in there to mess with them.

What sort of effect do these games and tricks have on the recruits?

The recruits didn’t think that I slept. I would come in and be loud on purpose at maybe two in the morning, and I’d maybe mess with the firewatch. I’d wake myself up at one in the morning just to yell at the firewatch and yeah, I was tired the next day, but it proved a point, it was worth it. They were like, “This guy never sleeps.”

When I was in recruit training, I never saw my drill instructors eat or drink. When do they?

When people ask, do drill instructors eat or drink? It’s not that we don’t eat or drink, but honestly you don’t have the time for one, but when you do, you’re just so tired you don’t even eat. I showed up here at 165 and at the end of my first cycle I weighed 128 pounds. That’s how much weight I lost in 13 weeks.

When the recruits are sitting at the table eating, that drill instructor is running around that table yelling at them the whole time as well. He doesn’t have time to sit down and eat. Then they go outside and the drill instructor has to be outside.

When they go to the head, that might be the time that the drill instructor can eat. But, I can tell you as an experienced drill instructors, I went like four days before I really ate something. I’d have a bit to eat at home, but your throat hurts so bad you don’t want to eat. I’ve definitely fallen asleep at the table talking to my wife.

I’ve got a funny story for you like that.

I’ve woken up at night, yelling at my wife like she’s a recruit. Screaming at my wife. Jumping out of the bed, yelling at her, IT-ing in my closet and not even knowing it. I woke up in the morning and my wife asks, “Who is Recruit Paige? Because you were yelling at him last night.”

Another funny one, I got off work early one time and went to bed at 8 o’clock and something happened and 20 minutes later, my alarm went off and I jumped up, almost in tears, talking to my wife like, “Babe, there’s no way it’s 2:45 in the morning, there’s no way it’s 2:45. Wait, I gotta get dress, I gotta get dressed,” and she was like, “You’ve been asleep for 20 minutes.”

I had no idea, I literally thought I’d slept for hours and that’s how instantly the morning comes to a drill instructor. I was putting my cammies and everything on and she had to grab me and put me back to bed. I went from so scared and upset to so relieved that I was about to go back to sleep for six more hours. It ended up being some of the best sleep I’d ever had.

I was literally a grown man almost in tears in his bed saying, “There’s no way it’s time to go to work, please no.”