Confessions Of An Apache Pilot: What It’s Like To Fly The Military’s Most Heavily Armed Attack Helicopter

We talked to a former Apache pilot about why the aircraft is so beloved in the military, and about that one time he almost got busted for flying an attack helicopter while intoxicated 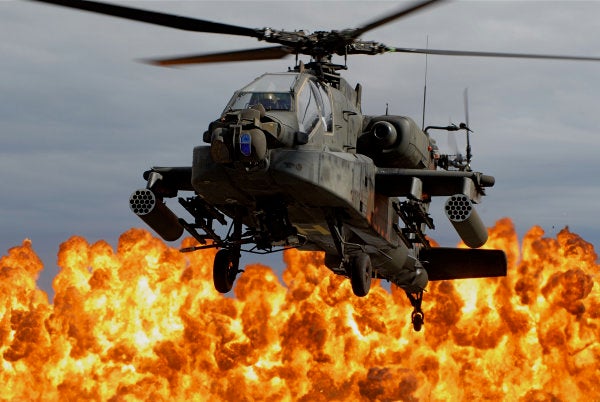 Welcome to Confessions Of, an occaisional series where Task & Purpose's James Clark solicits hilarious, embarrassing, and revealing stories from troops and vets about their job, billet, or a tour overseas. Are you in an interesting assignment and think you might have something to share? Email james@taskandpurpose.com with your story.

“Nothing is more powerful than a young boy's wish. Except an Apache helicopter. An Apache helicopter has machine guns and missiles. It is an unbelievably impressive complement of weaponry, an absolute death machine.”

While this Patrick Stewart quote may be from an R-rated movie about a talking teddy bear, it's remarkably accurate. After all, the old warhorse has been kicking ass since it was first adopted by the U.S. Army in the 1980s. Designed to get into trouble fast and put it down even faster, the AH-64 Apache usually comes bristling with ordnance, from an M230 chain gun firing 30mm rounds to Hellfire missiles and rockets.

In the words of Tyler Merritt “it's basically a fucking flying tank.”

The CEO of the popular veterans clothing company Nine Line Apparel and the founder of the non-profit Nine Line Foundation, Merritt spent three years in the pilot's seat of an Apache, including a yearlong tour to Iraq between 2008 and 2009, before he left the service in 2014 following a lengthy stint as a special operations air mission commander.

Task & Purpose had a chance to ask Merritt what it's like to fly the Apache during a gun run, what shenanigans he and his guys got up to downrange, and about that one time he almost got busted for flying an attack helicopter while intoxicated.

Task & Purpose: Imagine you're talking to someone who's never seen a helicopter. In a few words, describe the Apache.

Tyler Merritt: It's basically a fucking flying tank. Usually with angry jaws on the side, just to fuck with people.

Why do you think the Apache is such a popular helicopter in the military community?

Most guys who join the military are not in it for the money, they're there to blow shit up. And if you can fly around and blow things up, as a kid who played army, it doesn't get much cooler than than that. In reality, there's nothing cooler than being able to respond to a request for fire, or to help the guys on the ground.

When's the worst time to be an Apache pilot?

Flying during the day when the air conditioning breaks. That cockpit turns into a fucking sauna like no other. I'm talking canopy greenhouse that will get to about 138 degrees, and that's where all your electronics start to fail. You cannot escape the heat. You can't open your windows, so it gets ungodly hot.

Are there certain things that only Apache pilots can do?

Now that I'm out of the Army, I have no problem telling you these things…

I got hammered one time at a Delta compound in Iraq when I didn't realize that their Irish coffee was truly Irish coffee and had whiskey in it. So after I drank a few, we had to fly back. I thought it was just flavored. Turned out it wasn't.

We were flying low level, from Baghdad back up north, but I wasn't on the controls, and I only had a couple glasses!

I think it's more drunk co-piloting.

What's it like doing a gun run in an Apache helicopter? Can you describe how it feels, the sound, sensation, sight, etc?

TM: Man, it's like sex. I have the hairs on my arms pricked up just thinking about it, and if it's not too weird to say, I have a bit of a freedom boner.

There's nothing much better if you're into guns and into flying, and get to combine the two…There's a whole level of complexity involved. You're not just dealing with shooting and terminal ballistics, you're dealing with aerial ballistics. There's math and it's complicated: projectile shift, trajectory jump, all these things come into play. Shooting the 30 mm is pretty cool. The hellfire is totally anticlimactic. I thought there'd be a huge ball of fire, but it's just like pffffft.

But the rockets. The 2.75-inch hydra rockets. That thing is awesome. You don't have weapons processors that are doing the ballistic calibrations in your eyeball. It boils down to pilotage and skill.

Are there any traditions that are unique to Apache pilots?

TM: [Laughs] Yeah. Okay, so this is something my platoon did, and keep in mind we had no females in our unit at this time, and we got bored. We had high high energy, lots of craziness going on, and then the rules of engagement changed… So we'd go to the desert and fly around if there was nothing we needed to prosecute as a target, we'd go through the salt fields on the way back. And the tradition is that whoever is the worst shot with the rocket — and keep in mind that the rocket is the only one you need skill to shoot — whoever is the furthest from the target, when you land, you had to drop your pants and walk back through the flightline with your genitals hidden behind you, yelling “I'm a pretty pretty princess.”

I didn't make up the tradition. I just abided by it, and luckily I never had to do it. I wasn't always the best, but I was never the worst.

That's the fucked up humor that military guys use to pass the time. It's not the right answer, and it's not condoned, but you've gotta balance between professionalism and morale. And what people don't understand is that we deal with tragedy with dark humor.

It's a way of coping. People see it as a bunch of juvenile idiots that are just immature. I like to think of it as a way to escape that reality. A way to desensitize yourself to the fact that you just went and killed people.

Right, but you always get that one guy who doesn't get practical jokes. Like you take someone's beret, put it in water, and put it in the freezer so they'd have to chisle it out. And you're like “yeah, that's funny.”

But then I'd go open up my flight bag to grab my glasses and they're broken. And he's like “oh, I got you good!”

No, you just destroyed my shit. You don't get how practical jokes work.