Have you ever been deemed a heretic for minor infractions of protocol? 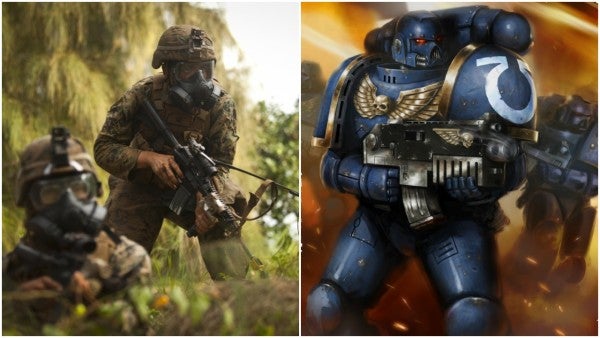 I am obsessed with Warhammer 40,000, the tabletop war game set in a grim vision of the far future where the galaxy-spanning Imperium of Man is besieged by space orks, Chaos cultists, genocidal robots and all sorts of other horrible baddies.

And when I say grim, boy is it grim. It is so grim and dark, it inspired its own genre: grimdark. Because not only is the Imperium of Man in Warhammer 40K under constant external threat, it is also collapsing from within under the weight of its corrupt fascist bureaucracy.

Sound familiar? It should.

Despite its dystopian setting, many people in the military are big fans of Warhammer. In fact, the Army sent its first 40K team to a Las Vegas tournament in January, and many other service members get together to paint miniatures and play against each other at home — and even in Afghanistan.

Part of 40K's popularity stems from its countless spin-off novels, video games, fan films and soon-to-be TV shows, most of which are swashbuckling tales of military valor in a desperate universe.

Reading the lore is how I got into 40K, and I soon noticed that the glorious Space Marines, the proud Imperial Guard troopers and brave Imperial Navy crewmen face many of the same day-to-day challenges as real-life American service members.

Not convinced? Read on, for in the grim darkness of the far future, there is only war — and denied leave requests.

1. Both US service members and the Imperium use 10,000-year-old equipment

Whether you’re flying the same B-52 that your grandfather flew, firing a rifle that’s been in use more or less since Vietnam, or sitting behind a computer that still runs on Windows 95, you can understand the struggles of many an Imperial Navy pilot flying a centuries-old Fury Interceptor or an Imperial Guard trooper rolling in a dilapidated Chimera APC.

Scientific innovation is a heresy in the Imperium of the 41st millennium, so the empire of man reuses the same weapons and equipment for generations. In fact, many Space Marines take pride in their storied power swords and bolters, which are passed on through the centuries like lethal heirlooms. So if you ever hear someone refer to their M2 .50 caliber machine gun as The Voice of Terra, now you know why.

2. Ever pray to the machine spirits to keep said equipment working?

Again, the Imperium isn’t big on science or logic. In fact, Imperial mechanics belong to an order of shaman-like tech-priests whose main method of repairing faulty equipment is to light incense and pray to the machine spirits in hope that it will keep the spirits running smoothly.

That may sound far-fetched for today’s military, but keep in mind that the Air Force has to find replacement parts in a scrapyard, the toilets on the Navy’s newest aircraft carriers don’t work, and the Coast Guard’s sole heavy icebreaker nearly sinks every time it goes to Antarctica. As one Coast Guard vet put it, when it comes to maintenance, sometimes you just have to settle for “not actively on fire.”

3. Ever been deemed a heretic for minor infractions of protocol?

Corrupt fundamentalist command structures don’t take kindly to rule-breaking, and the Imperium of Man is no exception. In fact there’s an entire secret police called the Inquisition whose job is to purge heretics (and often the thousands of innocent people nearby them, just to be safe). Your sergeant major probably won’t go that far after catching you not wearing a cover outside, but he or she might act like it.

Whether you’re battling Chaos cultists in the Eye of Terror or tracking Al-Shabaab militants in Somalia, you may think to yourself, “Why am I here? What is the long-term purpose of this fight?” Great power competition, Ork invasions, non-state actors and Tyranid hive fleets all seem to have one thing in common: they never end.

5. Marines are a cult unto themselves

Everyone loves to hero-worship. Some folks love Chesty Puller and James Mattis, while others prefer the Space Marine Primarchs Roboute Guilliman or Rogal Dorn, Whatever your inclination, Marines from both the year 2000 and 40,000 are zealous guardians of their heroes, lore and rituals, and may the Emperor’s wrath befall any who dare threaten their battle brothers.

OK, so maybe your average American grunt won’t experience this on a day-to-day basis, but both the Imperium and U.S. armed forces love a good giant sword. The Air Force has its Order of the Sword, where airmen present esteemed officers with massive blades in recognition of their contributions to the enlisted force (at least on paper). Similarly, the Imperial Guard uses chainsaw swords to carve space Orks in half. Tomato, tomato.

Of course, the Air Force also has sword-filled missiles for killing Al Qaeda commanders, so there’s that.

7. Nonsensical orders arrive decades after they were sent

In Warhammer, strategic orders are broadcast between the stars via telepathic psykers, but due to the unpredictable nature of the Warp and the vast distances between worlds, those orders often arrive garbled and hopelessly out-of-date — just like when your PCS order has been backlogged for over a month.

8. Obsessed with skulls and eagles

The Imperium loves skulls, and the U.S. military loves The Punisher. The Emperor’s sigil is a two-headed eagle known as the Imperial Aquila, while America’s national bird is the bald eagle. The Third Reich, Tsarist Russia and fascist Italy liked similar symbols, but that's just a coincidence.

9. Ever chug an energy drink and wonder about all the chemicals in them?

Green Taurox is a recent addition to the Warhammer lore, but boy is it welcome. According to the Regimental Standard, the energy drink will “affix bayonets to your productivity!” Best of all, 98.7% of the material used to produce the drink originates in the known Imperium, a.k.a. somewhere in the galaxy. It really makes you wish for more than just Red Bull and Rip Its, doesn’t it?

If there's anything that American service members hold dear, it's their heroic, adorable, noble, very good military working dogs. The Imperium holds its own MWDs, called “canids” in similar high regard. In fact, the Regimental Standard proclaims that “all canids are officer rank” in order to “prevent undue feelings of superiority among privates.”

“This means that striking your canid, presuming to give it commands or, theoretically, disobeying its orders are all offenses punishable by death,” the Standard adds. “Refusing to follow a canid into combat is also a capital offense.”

Despite the endless challenges facing the Imperium of Man, its soldiers continue to fight on with ferocious intensity. In fact, in one famous instance, the planet on which an Imperial Guard army was battling literally broke apart and the troopers kept on fighting. So too does the U.S. military keep serving with distinction wherever they’re called.

The Emperor Protects! Or, um … ‘Merica!