Kim Jong Un has a clear message for his generals: throw ya guns in the air like you just don't care 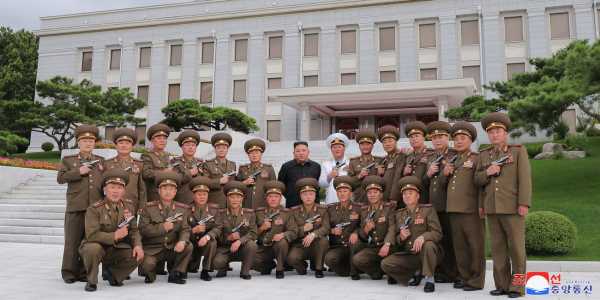 Kim Jong Un has a clear message for his generals: throw ya guns in the air like you just don't care.

The pint-sized leader of North Korea reportedly handed out dozens of pistols engraved with name to several military commanders to commemorate the 67 years since the signing the Korean War armistice.

According to Business Insider, the pistols are dubbed “Paektusan” after Mount Paektu, “a dormant volcano that has great spiritual significance to Korean people.”

Korean state media marked the occasion with a publicly-released photo which is absolutely not intimidating whatsoever.

In fact, this definitely looks more like a would-be gangster's album cover than a military ceremony, no? Indeed, President Donald Trump may need to change the nickname for North Korea’s leader from “Rocket Man” to “Lil’ Kim,” because the latter seems poised to drop the hottest diss track of 2020.