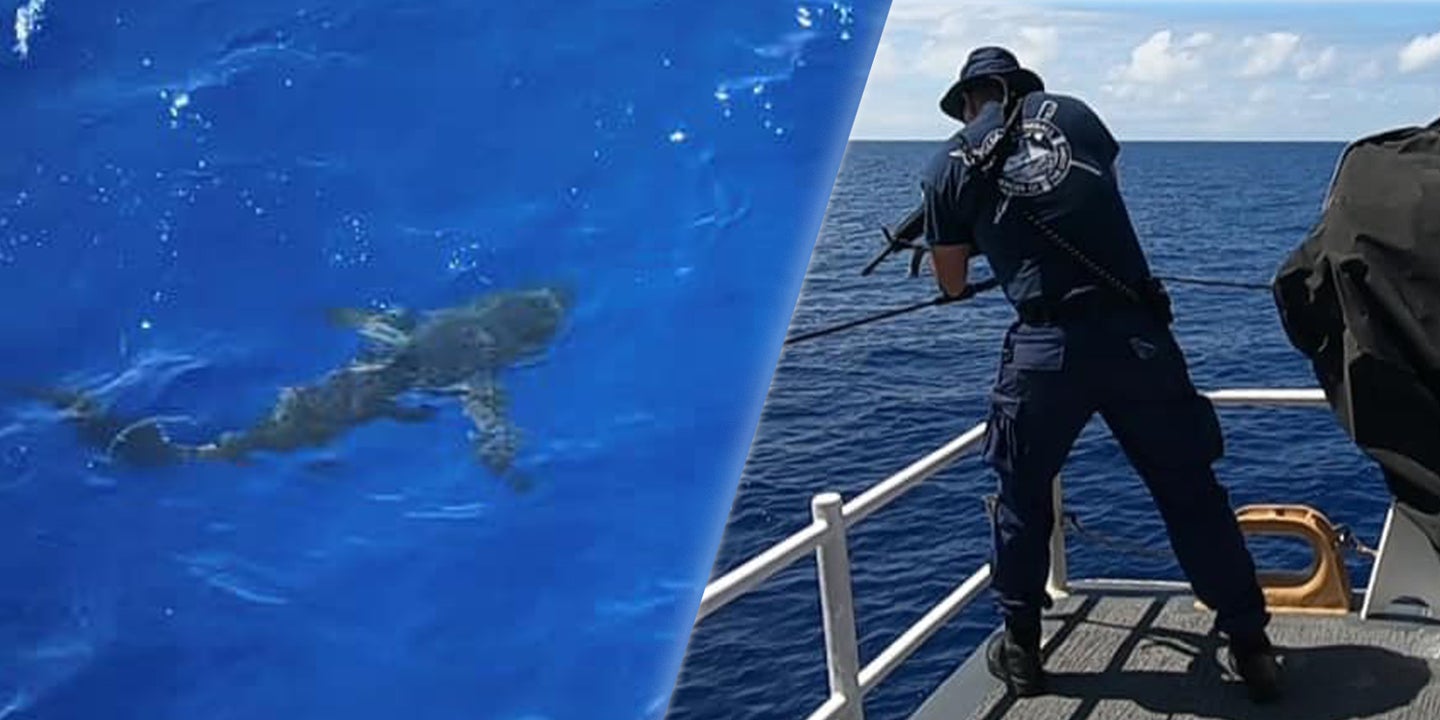 A group of lucky Coasties who were swimming in the Pacific Ocean narrowly avoided starring in an impromptu remake of Jaws thanks to the quick trigger finger of a fellow crewmate on Wednesday.

As a way to break up the daily monotony of life at sea, the crew of the U.S. Coast Guard Cutter Kimball was recently rewarded with a swim call — meaning everyone kicks off their flippy-floppies (or combat boots) and leaps into the wide-open ocean.

However, they had an unexpected, and entirely unwanted guest: an 8-foot Mako shark.

Here’s how it went down, according to a post shared by the official Facebook page for the vessel:

Everything was by the numbers.

Everyone was having a great day.

Everyone was smiling and having fun.

Now, before continuing I need to pause to draw attention to this truly masterful Facebook post. Official statements made by military units on social media are, usually, for lack of a better word, boring. But not this post, no way, no how. You can practically hear the glee in the author’s voice as if they were hanging out at the smoke pit — or, in the case of the Kimball, on the deck recounting that time ten minutes ago when they were almost shark food:

As if right out of a Hollywood movie, a 6-8 foot shark (no exaggeration) surfaced at the Rescue Door and was swimming toward 30-40 people in the water about 30 feet away. Everyone on the Flight Deck had a bird’s eye view. A review of video shot by a crew member reveals it was likely a Long-Fin Mako or Pelagic Thresher Shark – not something to mess with!

ME1 Cintron, our shark watch, was on the Flight Deck and immediately locked on target…literally!

Our animal-lover Chief who wants to save every animal she finds yelled “Shoot it!”

Now, while many of us would consider crapping our swimsuits a completely reasonable response, Coasties are generally more level-headed in the water. While some of the crew made their way to the cutter’s various ladders, others swam out for the smaller boat accompanying the Kimball. Fortunately for them, the day’s little excursion into the deep blue had been planned down to the last detail, from an inflatable unicorn — lol, why? — to rescue swimmers and overwatch.

As the Mako moved toward the swimmers still in the water, Cintron fired off a “well-aimed burst” right over the top of the shark.

“The shark would wave off with each burst but kept coming back toward our shipmates,” notes the Facebook post (subsequent reports confirmed that the shark was not injured, so please, PETA, do not email me).

By the way, here’s how I imagine Cintron responded when he was given permission to open fire on a fucking shark:

Thanks to his timely intervention, in addition to what I’m sure was some furiously fast swimming on the part of the crew, nobody was seriously harmed, and even the inflatable unicorn made it through in one piece.

Ironically, the only injury was in the form of a small scrape on one of the sailor’s knees — directly in the center of a tattoo of shark’s teeth.

At the end of all this, the only question I really have left is: Why in the hell wasn’t the Coast Guard in Jaws? If they had been there, that big bastard would’ve been dead as soon as his fin popped up out of the water, like:

Related: Watch a Coastie give zero f*cks as he leaps aboard a moving narco sub and pounds on the hatch