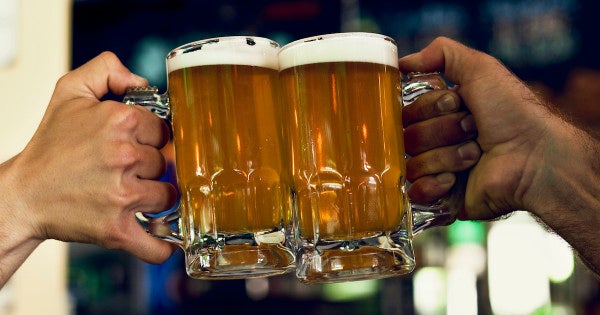 The Royal Australian Navy managed to snatch a fire-stricken town from the verge of crisis last week with an emergency beer run for the ages.

Australia's ongoing brushfires have consumed nearly 15 millions acres of land and killed at least two dozen people and millions of animals since they first started in September 2019, according to data gathered by the University of Sydney, making them the most intense to roil the country in recent years.

Among the communities affected by the brushfires is Mallacoota, a small town on the coast of the Australian state of Victoria that on New Year's Eve was cut off from the rest of the country when flames and debris obstructed the sole road in and out of the town, CNN reports.

Without its main supply line, Mallacotta started to run low on a critical resource: beer.

“We were running low of supplies and a pub can't run without beer, can it?” Lou Battel, owner of the Mallacoota Hotel, told SBS News. “Every Australian needs a beer and definitely the emergency services working non-stop.”

“The pub is at the heart of regional communities, and a pub with no beer is bad enough at the best of times,” Carlton & United Breweries CEO Peter Filipovic told CNN. “After what Mallacoota residents and fires have been through the least we could do is make sure they could enjoy a beer.”

“We're not sure if the Navy has ever shipped beer to civilians before but these fires are an extraordinary disaster,” he added.

Luckily, the Royal Australian Navy was happy to do so, according to CNN.

“[We] recognize how this resupply will positively impact the morale of the community,” an Australian Defence Force spokesperson said in a statement, adding that the beer is not “occupying unnecessary space on the HMAS Choules.”

Here's to you, HMAS Choules, on pulling off what can only be described as an unprecedented military beer run. Sure, you didn't deliver much-needed brews to your buddies in an active war zone, but a cold beer is an oasis of relief in the middle of a world-historic blaze — and that's something we'll drink to any day.