Mike Rowe says there are no ‘safe spaces’ in the military. He’s wrong.

"The military is not a safe space," Rowe said. 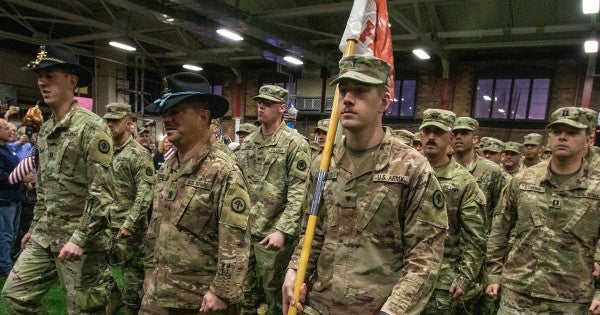 Television host Mike Rowe had a lot of great things to say about the military on Fox and Friends recently, but one thing he mentioned during the Veterans Day segment requires a rebuttal.

Rowe, most famous for being the host of “Dirty Jobs,” rightfully saluted the courage of a wounded veteran, but then made a common mistake of civilians when they try to honor military service. He ascribed an abstract mythic greatness to a group that's filled with a wide variety of people with a wide variety of backgrounds and experiences.

“Is there a greater meritocracy in the world? Is there a better example of true diversity? The thing that I'm most proud about when I go to bases when I visit with people, they are utterly colorblind. There's no conversation about 'trigger words.' There's no safe space. The military is not a safe space,” Rowe said.

But is that true?

But listening to right-wing commentators, you'd think that designated safe spaces for transgendered disabled immigrants were springing up in honkytonks in BFE, West Virginia. In reality, most people who complain about trigger words and safe spaces have only encountered them via internet memes.

Perhaps he meant trigger warnings. Trigger warnings don't exist in the military. They also don't exist at the Post Office, the Fire Department, the 7-11, Goldman Sachs, or the vast majority of workplaces. They rarely exist even in universities. Even when trigger warnings actually exist, they are just common courtesy. It's not crazy that perhaps someone should warn those who may have been sexually assaulted that a book being discussed in class involves sexual assault. That's not being politically correct. That's just not being an asshole.

Safe spaces? The military is the safest space there is. Saying an ethnic slur at Yale might get you expelled. Saying the same thing in the military might get you criminally prosecuted. People can literally be imprisoned for saying the wrong things, and rightly so.

The military and veteran community is the world's largest circular firing squad.

There is a prescribed identity. It is male, conservative, and Christian — often assumed to be the default. Those who diverge from that identity are often seen as betraying the tribe. On active duty, those insurgents often try to stay under the radar. Once they're veterans, they either become demonstrably rebellious, e.g. woke #MilTwitter, or they go along to get along.

They can't even post pretty mainstream opinions on Facebook pages and similar social media groups that claim to be for all vets. There's a prescribed range of acceptable positions, and those who aren't in it get a disproportionate amount of hate, not from civilians, but from those who are supposed to be their brothers and sisters in the veteran community (though most of the extreme hate is from the brother side of the house).

Are service members and veterans uniquely dysfunctional among the tribal chaos that grips the U.S.? No. But at the same time, they are no better than anyone else. The military is made of ordinary people doing extraordinary things, but they are still ordinary people. They keep America safe, but they live in a safe space themselves. Pretending they don't isn't doing anyone any favors, and perpetuates an idealized myth of the military to the detriment of veterans everywhere.