"You can see the driver, the license plate, you can watch that person coming towards you. You start thinking about that application militarily … it's exciting." 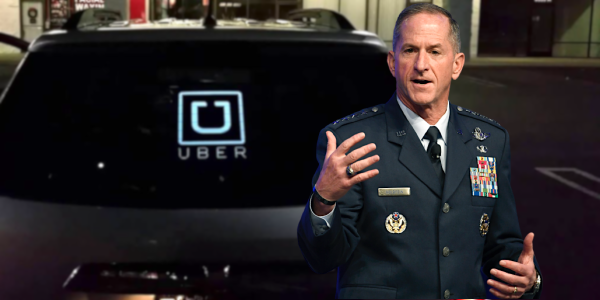 At least, that's the way Air Force Chief of Staff Gen. David Goldfein seemed to characterize ABMS at a fireside chat hosted Monday by the Center for a New American Security (CNAS).

At a recent demonstration of the network, Goldfein said, a space satellite detected an enemy ship and passed information about it to an intelligence, surveillance and reconnaissance (ISR) asset. The ISR asset then “put its sensors on it, got target quality coordinates and a 90% confidence in the ID,” and passed that onto a commander aboard a Navy cruiser along with a list of ways to deal with the enemy ship both “kinetically and non-kinetically,” Goldfein said.

“Here's what's important,” the general added. “The first human in that loop was on the cruiser. Everything else was done at machine speeds. That's our future. So when I say 'connect the joint force' I'm talking about making sure that every sensor, every shooter has got access to each other and commanders have access so we can operate at a speed that the adversary is just overwhelmed.”

So what does Uber have to do with ABMS? Apparently, the two networks are not so different from one another, Goldfein said. Like ABMS, Uber provides users with a common operational picture, except it's of cars and riders, not cruise missiles and attack drones.

“It's actually closing a killchain,” Goldfein said. “You match a vehicle with a target, which is somebody who wants to , and you can see it all happen. You've got options you can pick from, you can see the driver, the license plate, you can watch that person coming towards you. You start thinking about that application militarily … it's exciting.”

In a similar vein, the live navigation app Waze provides a threat presentation, such as a cop sitting in a speed trap two miles down the road, Goldfein said. Waze was founded by an Israeli company, Waze Mobile, and Goldfein said he told the Israeli Air Force chief during a recent visit to the country that he was “looking for your Waze guy so we can bring him on as a pioneer.”

ABMS will need continuous development to stay ahead of adversaries, Goldfein said, which means the Air Force will need a host of computer wizards to keep the system running smoothly.

“I joke and say 'what's the next uniform change for the United States Air Force? Hoodies,'” the general said. “Because we need to bring in some young, high-tech, smart coders who understand how to manipulate software at the speed of relevance.”

“Tell me about a platform that we're procuring that doesn't have its own little computing capacity,” Goldfein said. “If we start thinking about networks as connecting computer technology as opposed to connecting platforms, it provides creative solutions that industry already is using.”

Coast Guardsmen secure communications equipment to a line to bring it aboard USS Thomas Hudner (DDG 116) in the Gulf of Mexico Dec. 16, 2019. The Navy used that equipment during the first demonstration of the Advanced Battle Management System.

The catch is that it will take a lot of funding from Congress to fuel all that network development, and Goldfein said it could be a tough sell for lawmakers, who are always looking for ways to bring home some bacon for their constituents.

“I don't think I'm going to have a single network lobbyist pounding on the doors of Congress, but there's going to be plenty of platform lobbyists,” Goldfein said. “It's not an easy narrative in a town that's primarily focused on platforms.”

“The networks you're describing, you can't touch them, it makes it a very hard sell particularly when there aren't huge factories in Congressional districts that are producing these things,” she said.

But if the U.S. is going to defend itself against near-peer adversaries, Goldfein said, it's a pitch he will have to nail.

“Data is the currency of future warfare,” he said, “and if you don't have access to it, you are not in the game.”