“It’s a death from a thousand cuts.” 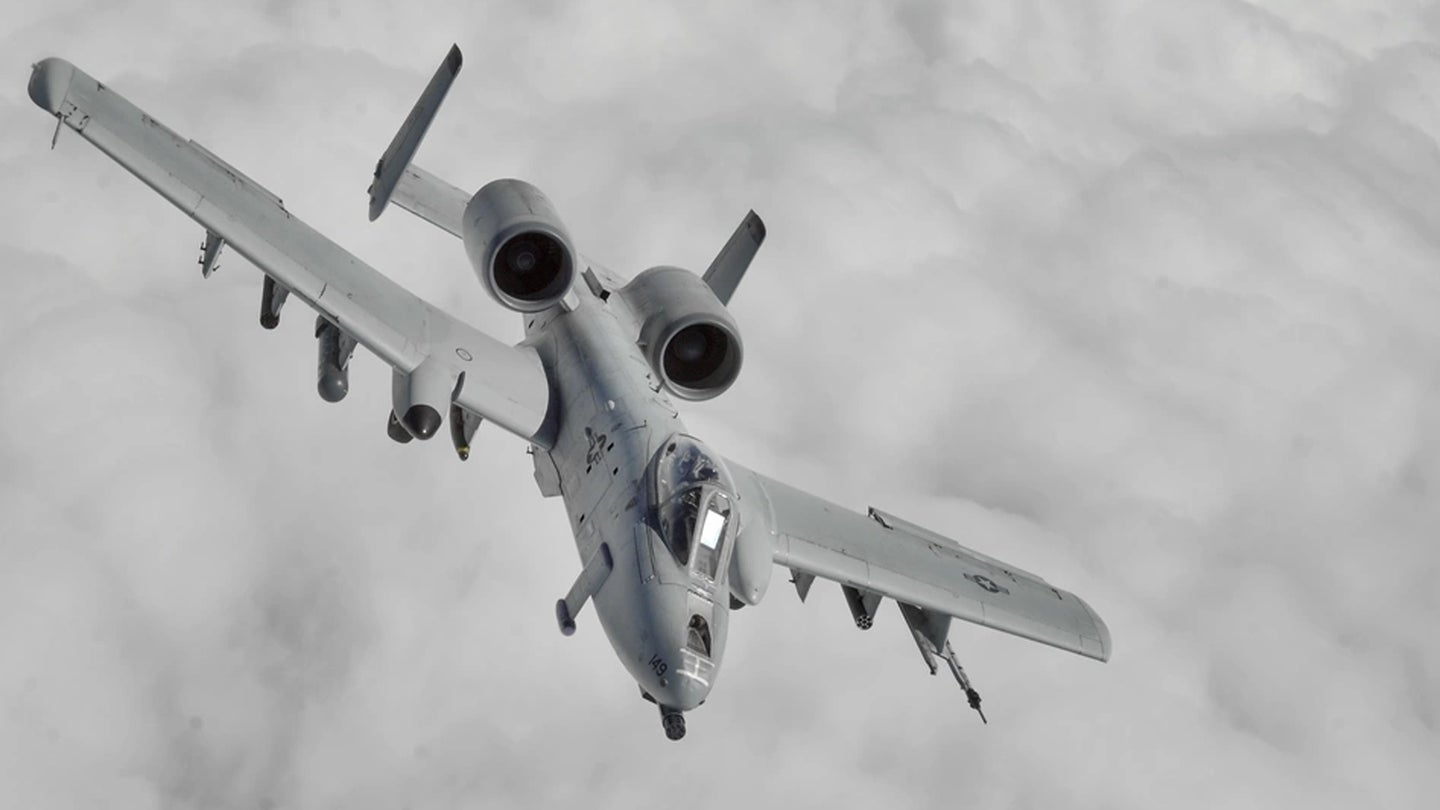 You can’t have a superhero without a nemesis, and the beloved A-10 Thunderbolt II attack plane, which has saved the bacon of countless ground troops over its 45-year career, is no exception. The thing is, the A-10’s nemesis is the Air Force itself, and a new report reveals how hard the service has been working behind the scenes to starve the aircraft of replacement parts over the past 14 years.

The goal of this starvation campaign is to convince Congress that the A-10 is old, difficult to maintain, and not worth the upkeep, according to report released on Monday from the Project On Government Oversight, a non-profit watchdog group. This sabotage effort goes against the wishes of Congress, which aims to keep the extremely effective A-10 in business.

“Congress has included several provisions in federal law to prevent A-10 retirements,” the report said. “Yet sources have told the Project On Government Oversight (POGO) that, despite these provisions, Air Force leaders have pursued a de facto retirement of the fleet through a starvation campaign.”

The Air Force defended its A-10 policies, saying it was expending significant resources to keep the plane aloft.

“The Air Force spends significant money and manpower to keep the nearly 45 year old aircraft operational,” said Ann Stefanek, chief of media operations for the service. “In fact, the Air Force has invested $880M in A-10 modernization with plans of flying the aircraft into the 2030s.”

Even so, one former A-10 pilot, retired Lt. Col. Gregg Montijo, told Task & Purpose that the report was “spot-on.” Montijo, who still works closely with the A-10 community in a training capacity, said pilots he worked with recently at the 303rd Fighter Squadron at Whiteman Air Force Base, Missouri, one of the most experienced A-10 squadrons in the Air Force “all talked about the issues mentioned in the article.”

Specifically, there are concerns about gun maintenance and bad ammunition. There have been four gear-up landings in the past four years “all caused by either gun maintenance issues or bad ammo,” Montijo said. “Gun blows up while firing it, pilots go to lower the landing gear, the nose gear does not come down, and the procedure is to land it all gear up.”

Though the A-10 was designed to land gear up, the landings all caused between $750,000 and $2.5 million worth of damage, he said, and they put the pilots at a much greater risk of death or injury.

The Air Force’s efforts to starve the A-10, also lovingly called the Warthog, include allowing supplier contracts to lapse so that they can’t provide replacement parts; and reducing the Air Force maintenance depot’s capacity to conduct overhauls. But one of the most effective efforts to ground the plane is the Air Force’s move to delay the re-winging of the A-10, which has basically grounded many jets that can’t fly because their current wings are too old.

“[W]ithout new wings, some of the aircraft face a kind of de facto retirement, grounded when inspections show signs of metal fatigue or when the current wings have too many flight hours,” the report reads.

It all started in 2007, when the Boeing Corporation won a $2 billion contract to build new wings for 242 A-10s. But the Air Force let the contract lapse after only 173 new wing sets were produced, or 70% of the total new wings needed. After the contract lapsed, branch leaders then attempted to argue that restarting the wing production line would be too expensive because the contract would have to be re-bid, the report read. Congress didn’t buy it, and instead told the Air Force it had to buy the new wings anyway.

Still, there was a backlog of old-winged jets in the A-10 fleet, and the last of the originally-contracted new wings were not installed until fiscal year 2018, the report said. There have yet to be any new wings delivered since, because the production line has to restart and the new contract does not start until fiscal year 2023.

However, new wings are only one of the many parts that A-10s are running low on. Other parts include missing central interface computer units, integrated flight and fire control computers, radios, hydraulic actuators to control flight surfaces, and replacement parts for the 30mm GAU-8/A cannon, according to the report.

“Part shortages for the cannon are so acute that at one squadron there are anywhere between three and eight aircraft that can’t shoot at any given time,” the report said.

These shortages and the wing shortage have the same root cause: the Air Force not renewing contracts with suppliers. Making things worse, the report said the Air Force has also tried to shut down A-10 maintenance facilities at Hill Air Force Base, Utah, which is one of three Air Force maintenance depots that perform the most intensive repair and rehabilitation work on military aircraft.

Though Congress stepped in to save the facilities, the combination of grounded aircraft; parts shortages; and the threat of depot closure has scared many experienced maintainers to find new jobs, the report read. Though the Air Force needs to send 57 A-10s through the Hill facility every year, right now it can handle only 31 a year, the report said.

“[U]ntil the A-10 program receives the parts it needs in the right quantities, it will be difficult to entice the maintenance crews back,” the report wrote.

The A-10 instability is also costing the Air Force the institutional knowledge of close air support specialists who have done nothing but support ground troops for the past 20 years, the report argued. Many A-10 pilots say they would leave the service if the ‘Hog was retired, the report said, and the art of close air support doesn’t just teach itself. In fact, in World War II, Korea and Vietnam, ground troops suffered a great deal while pilots re-learned the art lost to post-war military downsizing.

“If you had access to the budget submissions over the years, you would see a continual reduction over time,” Montijo said. “It’s a death from a thousand cuts.”

Why does the Air Force seem to hate the A-10 so much? Many experts say it is part of the branch’s efforts to replace the jet with the multirole F-35 Lightning II and the F-15EX Eagle II, which the service argues can also perform close air support. But many members of Congress, including former military aviators, say the F-35 can’t hold a candle to the A-10 in the close air support business. The Air Force also argues that the slow-moving A-10, while great against Taliban insurgents wielding low-tech AK-47s and RPGs, would not survive against higher-tech anti-aircraft fire.

The Project On Government Oversight pushed back on this argument, saying it assumes Warthogs would fly deep into enemy territory, outside the help of friendly ground troops. But that’s not what A-10s do, the report said. Instead, ground and air units like the A-10 are meant to support each other, and ground troops would suppress enemy air defenses “as a matter of routine,” the report said, citing 2001 Marine Corps guidance on the suppression of enemy air defenses.

“Without [the A-10] or a dedicated replacement program, the military runs the risk of going into the next war unprepared,” the report said. “The troops on the ground will pay a terrible price if this critical capability disappears.”

It also doesn’t help that most A-10 pilots don’t make it up to the four-star general ranks, Montijo said. Still, like waves of hostile ground fire, the Air Force has failed to bring the A-10 down for good so far. Overall, the report “smells like the same things that have been going on for years back to the days when I flew the plane,” said Montijo, who flew his final A-10 flight 20 years ago.

“Once the Berlin Wall came, the Air Force has continually tried to get rid of the A-10 through various funding schemes (or lack thereof),” he said. “Yet as many a soldier or Marine knows, there’s nothing else like it for close air support.”