At least one Air Force base is waging a slow battle against feral hogs — and way, way more than 30-50 of them 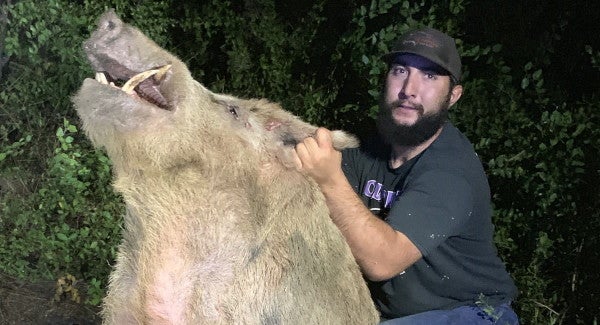 At least one Air Force base is waging a slow battle against feral hogs — and way, way more than 30-50 of them.

A Texas trapper announced on Monday that his company had removed roughly 1,200 feral hogs from Joint Base San Antonio property at the behest of the service since 2016.

Wyatt Walton, founder of Texas-based Lone Star Trapping, shared the news with local media after his team hauled a 400-pound hog off of the Gateway Hills Golf Course at Lackland Air Force Base, where the company is contracted for trapping operations through 2019, over the weekend.

He's not wrong. The United States is currently dealing with a “rapidly expanding” population of 6 million feral hogs across 39 states, according to the U.S. Department of Agriculture, an explosion that, in some places, has given rise to a cottage industry of helicopter-based hog hunting.

According to a 2017 JBSA environmental assessment, roughly 2.6 million of those swine reside in Texas, where they poses “a threat to human safety” near flight training facilities and military bases, among other properties.

JBSA officials has trying to figure out how to deal with its feral hog problem without resorting to some Starship Troopers shit for years. In May 2017, an Air Force draft document on JBSA sustainability concerns explicitly noted that growing feral hog populations were encroaching on training operations at both Lackland AFB and the Army's Camp Bullis.

The following July, JBSA officials began an assessment of “site-specific methods” to remove errant hogs from the affected areas, focusing on “a combination of hunting and trapping” at Bullis.

That process, according to the assessment, included dosing said hogs with non-toxic bait, following by “control activities,” i.e. shooting hogs at night from one of Bullis's several Hughes OH-6 Cayuse light utility helicopters

“Personnel involved in shooting operations will be fully trained and qualified in the use of the specific weapons used by their employing agency, personnel will direct gunfire exclusively at feral swine,” the document reads.

JBSA's 502nd Air Base Wing did not respond to requests for additional information from Task & Purpose. But to all those brave men and women at JBSA facing down a never-ending sea of feral hogs, we have one question: do you wanna live forever?