Fresh off a fraught decade-long rewinging effort, the Air Force's beloved A-10 Thunderbolt II fleet is poised to keep on BRRRTing in the free world for at least another decade — and the beloved attack aircraft will pick up some tasty new upgrades along the way 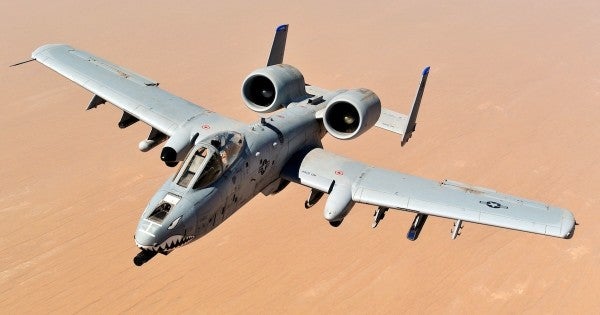 Fresh off a fraughtdecade-long rewinging effort, the Air Force's beloved A-10 Thunderbolt II fleet is poised to keep on BRRRTing in the free world for at least another decade — and the beloved attack aircraft will pick up some tasty new upgrades along the way.

Personnel at Air Combat Command are currently working to integrate the GBU-39 Small Diameter Bomb (SDB I) on all A-10 airframes as part of the Common Fleet Initiative (CFI) that, initiated in August 2018, is designed to bring the decades-old fleet “back to a common baseline” for ongoing operations.

“GBU-39 munitions have proven to be highly-desired weapons in ongoing conflicts, and the addition of this weapon to the A-10's arsenal will greatly improve the flexibility of ground commanders,” Alexi Worley, an ACC spokesman, told Task & Purpose.

Military aviation magazine Combat Aircraft first reported news of the SDB integration on Sept. 5, noting that a new “multi-target engagement capability” will make the A-10 “theoretically … able to target 18 weapons individually” while hauling four SDBs on a single hardpoint.

First introduced to Air Force inventory back in 1976, the A-10 had earned a reputation as a close air support workhorse among infantry troops for the distinctive roar of its GAU-8/A Avenger gatling gun. And while Worley said that no particular weapons were “expressly covered” in the CFI, the clear focus of the initiative is on enhancing the airframe's overall lethality.

Those enhancement include a new high-definition cockpit display that will improve the A-10's ability to find and fix targets from greater distances, jam-resistant GPS, an improved communication suite, and a three-dimensional surround-sound audio system that, according to a November 2018 request for information, will “drastically improve the spatial, battlespace, and situational awareness” for pilots.

“While Air Combat Command continually seeks new and improved weapons for all its fighter aircraft, A-10 planners and programmers are also keeping an eye out for which new weapons will prove useful to ground commanders,” Worley said.

While Combat Aircraft reported that the A-10 was set to receive “a Synthetic Aperture Radar pod,” Worley told Task & Purpose that ACC has “only conducted initial suitability studies and not yet made a final determination.”

The first A-10 airframes are set to receive the first batch of modifications as early as fiscal year 2020.