Brace yourselves: the Air Force's newest gunship is officially on the prowl downrange 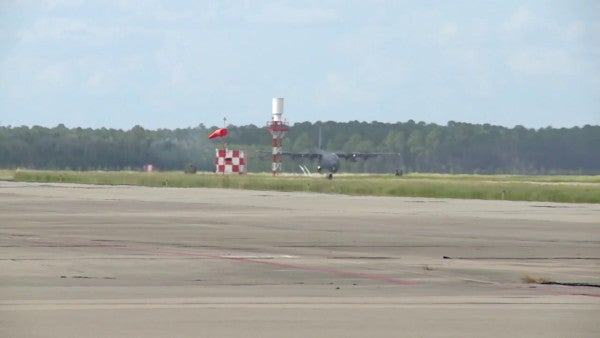 Brace yourselves: the Air Force's newest gunship is officially on the prowl downrange.

According to the Northwest Florida Daily News, which first reported the news of the combat deployment, the mission took place “just days before” the June 28 change of command ceremony for new AFSOC commander Air Force Lt. Gen. James Slife at Hurlburt Field in Florida.

According to The War Zone, the 73rd Special Operation Squadron at Hurburt is currently flying the Ghostrider in Afghanistan, likely in a close air support or armed overwatch capacity

An AC-130J Ghostrider gunship, Block 20 model, shuts down after arriving to Hurlburt Field, Fla., for the first time July 18, 2016. The Block 20 version of the AC-130J is modified with the 105mm canon and will be operationally tested out of Hurlburt Field(U.S. Air Force/Senior Airman Jeff Parkinson)

Described by AFSOC officials as “the ultimate battle plane” and “a bomb truck with guns on it,” the Ghostrider comes with the standard 105mm cannon and an additional 30mm GAU-23/A cannon, along with wing pylons designed for both GBU-39/B Small Diameter Bombs and AGM-114 Hellfire missiles.

The 30mm cannon in particular “almost like a sniper rifle. … It's that precise, it can pretty much hit first shot, first kill,” then-1st SOW commander Col. Tom Palenske told Millitary.com back in 2017, adding that the Ghostrider is “going to the most lethal, with the most loiter time, probably the most requested weapons system from ground forces in the history of warfare.”

But while the Ghostrider first hit initial operational capacity back in September 2017, a January 2018 assessment from the Pentagon's Office of the Director of Operational Test and Evaluation found that the Ghostrider's fire control systems “performed inconsistently when accounting for changing ballistic conditions” like shifts in altitude and ambient wind, requiring frequent in-flight adjustments to ensure the weapons' accuracy.

Beyond that, the 30mm cannon's full rate of fire of 200 rounds a minute caused the cannon to shake so violently that the fire control system's automatic safeguards kicked in, forcing the operator to again recalibrate the gun and mount to get the system moving again, according to the Pentagon OT&E assessment.

Those problems have since been addressed: According to the Pentagon's 2019 assessment, the Ghostrider systems were officially “effective and suitable” for CAS and air interdiction missions. The following the March, the 4th Special Operations Squadron,1st Special Operations Wing received an upgraded version of the new gunship with “major improvement in software and avionics technology.”

While details are scant on the nature of the Ghostrider's first combat mission, U.S. special operations forces have remained heavily in the fight in Afghanistan in recent years. Unfortunately, there's word yet on whether they can expect future Ghostrider support to include frickin' laser beams.

WATCH NEXT: The AC-130U Spooky Gunship Has Completed Its Final Combat Deployment