He's about to be awarded both the Silver Star and Bronze Star Medal (with combat "V") for his heroism during two separate engagements in Afghanistan. 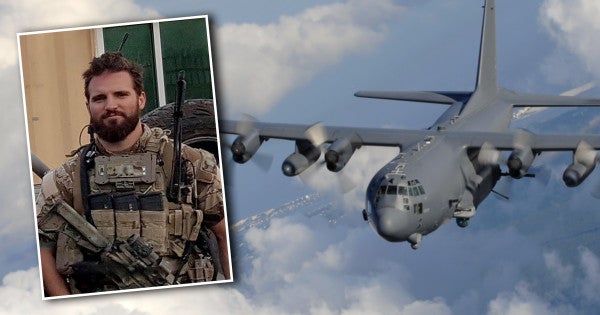 Air Force Technical Sgt. Cam Kelsch may need to get new uniform trousers in order to fit his enormous brass balls, since he's about to be awarded both the Silver Star and Bronze Star Medal (with combat “V”) for his heroism during two separate engagements in Afghanistan.

Kelsch, a tactical air control party operator with the 17th Special Tactics Squadron, 24th Special Operations Wing, will be honored next week for his “role in securing the safety of his joint and partner force members” while working alongside the U.S. Army's 75th Ranger Regiment on April 25, 2018.

During a night raid to capture a high value target, according to his Silver Star award citation, Kelsch “willingly exposed himself to effective enemy fire in order to conduct danger close fire missions from an AC-130 gunship using 40mm air to ground munitions 30-40 meters from his position.”

Later, Kelsch left his position under fire to get even closer to the enemy so he could drag a wounded teammate to safety. Despite being wounded himself, Kelsch then called in 105mm fire on a heavy machine gun just 70 meters away, located other enemy forces using surveillance aircraft, and then brought in precision bombs from F-16s and rounds from the AC-130s during exfiltration.

In short, he's a hell of a multi-tasker.

On a separate mission, Kelsch earned the Bronze Star for placing “himself in between an enemy position and his ground force commander, who had been injured as a result of a near ambush,” according to his citation. “While still being engaged by enemy personnel in immediate proximity, Sergeant Kelsch eliminated the threat and allowed his ground force commander to regain his bearing.”

A spokeswoman with the 24th SOW told Task & Purpose she could not release further details of that operation, but said it was a different operation on a different date.

Kelsch will be presented with both awards on April 9 during a ceremony at the Mighty Eighth Air Force Museum in Pooler, Ga.