74 Years Ago, Audie Murphy Earned His Medal Of Honor With Nothing But A Burning Tank Destroyer’s .50 Cal And Insane Bravery

On January 26, 1945, the most decorated U.S. service member of World War II earned his legacy in a fiery fashion 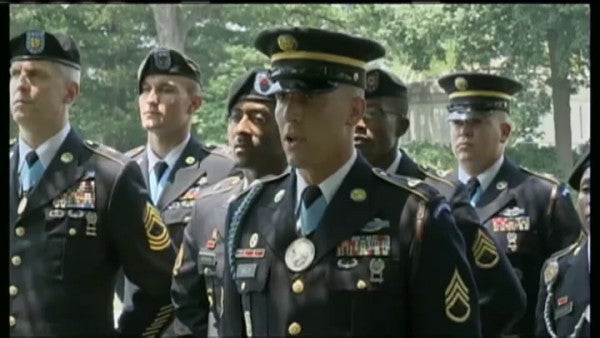 Audie Murphy — then a second lieutenant commanding Company B of the 1st Battalion, 15th Infantry Regiment, 3rd Infantry Division — found himself surrounded by six German tanks and wave after wave of enemy infantry while fighting in Holtzwihr, France. Rather than retreat with his men, Murphy made a gutsy decision: He ordered his soldiers withdraw to the cover of nearby forest and set up their artillery while he remained at his forward command post to direct their fire.

Things quickly took a turn for the worse. A nearby Allied tank destroyer burst into flames following a direct hit from an enemy tank, its crew fleeing to the woods and leaving Murphy alone. But Murphy didn't shrink from the oncoming onslaught of German armor; instead, he mounted the burning tank destroyer and took on wave after wave of German infantry with nothing more than the vehicle's .50 caliber machine gun and superhuman determination.

From his Medal of Honor citation:

With the enemy tanks abreast of his position, Second Lieutenant Murphy climbed on the burning tank destroyer, which was in danger of blowing up at any moment, and employed its .50 caliber machinegun against the enemy. He was alone and exposed to German fire from three sides, but his deadly fire killed dozens of Germans and caused their infantry attack to waver. The enemy tanks, losing infantry support, began to fall back.

For an hour the Germans tried every available weapon to eliminate Second Lieutenant Murphy, but he continued to hold his position and wiped out a squad which was trying to creep up unnoticed on his right flank. Germans reached as close as ten yards, only to be mowed down by his fire. He received a leg wound, but ignored it and continued the single-handed fight until his ammunition was exhausted.

He then made his way to his company, refused medical attention, and organized the company in a counterattack which forced the Germans to withdraw. His directing of artillery fire wiped out many of the enemy; he killed or wounded about 50.

“Second Lieutenant Murphy's indomitable courage and his refusal to give an inch of ground saved his company from possible encirclement and destruction, and enabled it to hold the woods which had been the enemy's objective,” the citation reads. His bravery also earned him a spot in the history books as one of the most highly-decorated heroes in U.S. military history — and set a new standard for courage under fire in the process.

Here's to you, Audie Murphy. There isn't a field in Valhalla that can hold balls as enormous as yours.