This Army Hero Fought Off 600 Nazis Virtually Alone. Now He’s Getting The Medal Of Honor 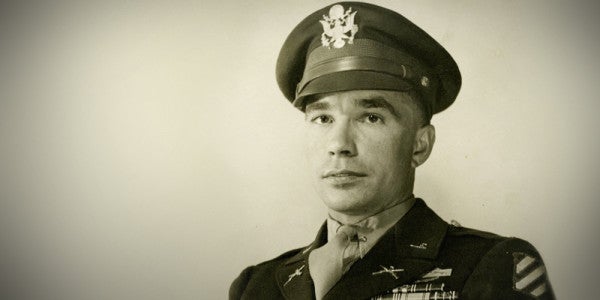 Standing 5 feet, six inches tall and weighing maybe 120 pounds soaking wet, 1st Lt. Garlin Murl Conner may not have been the most physically imposing GI during World War II, but on Jan. 24, 1945 he was an unmovable rock against which a wave of German troops crashed and ultimately rolled back.

Now Conner, who died in 1998, is posthumously receiving the Medal of Honor for his bravery in that battle, during which he called for artillery to shell his own position. President Trump will present the Medal of Honor to Conner’s widow on Tuesday at the White House.

With the U.S. military’s highest award for gallantry, Conner will become the second-most decorated service member of World War II, according to the Army. He is surpassed only by legendary 1st Lt. Audie Murphy.

Conner took part in 10 campaigns with the Army’s 3rd Infantry Division during World War II, Army officials said, and he was wounded seven times during 28 months of combat. His awards include three Purple Hearts, four Silver Stars and the Distinguished Service Cross, which is being upgraded to the Medal of Honor.

His injuries couldn’t keep him from service. In January 1945, he was recovering from a wound when he “slipped away from the hospital” to rejoin his unit and volunteered to be an artillery spotter, said Luther Conner, a cousin and attorney who was part of the 22-year effort to have his relative’s heroism recognized with the Medal of Honor. That meant he would be positioned between the U.S. and German lines.

“He interpreted the intelligence role very liberally and thought, ‘Well, no better intelligence than having eyes on the target,’ so that’s when he ran forward,” said Erik Villard, of the U.S. Army’s Center for Military History. “This was not his job, but this is something he felt he had to do.”

With just a field telephone and a Thompson submachine gun, Conner ran from a forest where the rest of his unit was dug in to face about 600 German troops – including a small contingent from the SS – and several German tanks, including the feared Tigers, Villard said.

Conner spent three hours in an irrigation ditch directing artillery fire, Villard said. At one point, German troops came within 10 meters of his position. Rather than pulling back, Conner called the artillery to hit his own position, “and said just keep firing for effect,” Villard said.

With 105mm howitzers and 81mm mortars raining fire on his position and the Germans within spitting distance, Conner likely knew his chances of survival were slim.

“At that point, he’s like: ‘OK, I am not long for this world but I am going to keep that artillery coming down because folks in my battalion who are in the woods behind me – 30 meters – have got to continue the fight,’” Villard said. “I’m sure at a certain point he’s just like: ‘Just keep firing because I don’t think I’m probably going to make it.’”

When his commanding officer asked if the shells were landing close to his position, Conner replied, “It’s already been over my position; it’s behind me now,” Luther Conner said.

U.S. Army 1st Lt. Garlin M. Conner and his wife Pauline, sitting on the porch of Pauline’s parents’ home in 1946.

Conner’s ability to shoot, move, and communicate during the battle show exactly how the Army is preparing soldiers for future wars, said Maj. Gen. Leopoldo Quintas, commanding general of the 3rd Infantry Division.

“That telephone with the wire connected was the most deadly instrument on the battlefield and he could communicate,” Quintas said. “He could call for fire. The other element, I think, that is so important is the element of leadership. He was a phenomenal leader and he was a leader of character.”

Conner never talked about what happened that day, but his wife Pauline Conner said he was obviously traumatized by is wartime experience.

“In World War II and Korea, they didn’t recognize PTSD like they did in Vietnam, but I’ve always said if anybody ever had PTSD he did because many times he’d wake up in the night with nightmares,” she told reporters on Monday. “After I would wake him up, he would go outside and sit on the porch and smoke cigarettes for hours at a time. But he still wouldn’t talk about what was happening.”

Pauline was just 15 years old when she first saw Conner at a parade for his homecoming, she said. She had read about his bravery in the local newspapers, but when she finally saw how slim he was, she told her mother, “My God, that little wharf rat, he couldn’t have done all they said he done,” she recalled.

She described her husband as a humble man who would say “Well, children” in lieu of “dang” or “darn.” She looks forward to meeting Trump on Tuesday to receive the nation’s highest award for valor on her husband’s behalf.

“It’s something he should have done in his lifetime,” Pauline Conner said as she fought back the tears, “but I’m going to be proud to accept it.”

Initially, when Pauline heard that the White House would call her to say her husband would receive the Medal of Honor, she thought it was a scam: “I’m 89 years old and people like to prey on old people like me,” she said.

Luther Conner and his wife were with her when she received the call from the White House. The woman on the other end of the line connected her to the president.

“He told me that he had read Murl’s record and he had done a magnificent job and more than that,” Pauline Conner recalled. “He said, ‘I’m awarding him the Medal of Honor.’

“I told him: You just got to be kidding. ‘No,’ he said, ‘it’s true.’ He said, ‘He deserves it.’ And I said: Well, thank goodness and tell that beautiful wife of yours to give you a big hug and a kiss for me. That was our conversation and I was really thrilled.”