He Built A T-Shirt Empire. Now He’s Building A Village For Homeless Vets

The CEO of Nine Line Apparel is creating transitional housing for homeless veterans. 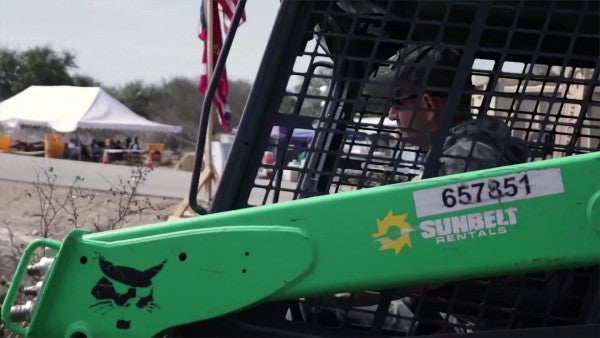 In the city of Savannah, Georgia, an Army veteran and entrepreneur has a plan to end veteran homelessness in his community. It starts with building a village of tiny homes.

“The idea that any of us could be homeless at any given point in time, just one paycheck away, it resonates,” Tyler Merritt, a former Apache pilot and special operations air mission commander, told Task & Purpose.

Merritt is behind the veterans village project, which is aiming to create as many as 24 single-occupant tiny homes in Savannah, Georgia. It's spearheaded by the Nine Line Foundation, a veterans charity he founded as an off-shoot from his company, Nine Line Apparel.

“I've been damn near bankrupt and upside down, one paycheck away, just like everyone else,” said Merritt, the CEO of Nine Line Apparel. Founded in 2012, the popular veterans' clothing company has recorded approximately $70 million in sales since it began, and roughly $24 million in just the last year, a spokesman for Nine Line told Task & Purpose.

“If you lose your family and friends and hit rock bottom, there still has to be some organization out there that can give a hand up, not a hand out.”

To date, they've raised roughly $300,000 to support the initiative and built 10 tiny homes, with the goal of moving in occupants within the next several months, and plan to construct the remaining buildings by year's end, Merritt told Task & Purpose.

The idea is to use the village as transitional housing where the participants can partner with counselors and career coaches, and eventually find gainful employment, before moving into a place of their own.

“If I provided 50 permanent structures, it puts a dent, but it doesn't cycle people through, it's not sustainable,” he said. “There's something about earning that makes it so it's worthwhile. They'll find meaning in getting up in the day because they have a job.”

In the past, the foundation has built custom homes for severely wounded veterans, focusing on helping one person at a time, “to help them return to some sense of normalcy,” Merritt explained.

But the individuals they were helping in those cases already had a built-in support network of friends and family, Merritt said. “The individuals that we're dealing with now, have none.”

“For us, the first step is getting an individual off the street,” Merritt said, before adding that “it's housing first, not housing only.”

Nine Line Foundation is partnering with Chatham-Savannah Authority for the Homeless on its veteran village initiative, along with Georgia Southern University, which will provide vocational training and career counseling, Merritt said.

Local nonprofits and businesses have rogered up to provide food and clothing to the program, and the initiative's sponsors include the Joe Marchese Commercial Construction & Development, The Josh Reddick Foundation, Coca-Cola, Blu Site Solutions, and Food Lion.

To make all this work, Merritt said he intends to pass on the federal funding typically set aside for homeless initiatives in favor of volunteer-work, donations, collaboration between charities, fundraisers, and sponsorship.

“The [Department of Housing and Urban Development] has its initiatives and there's other philanthropic organizations that mean well, but we're not a socialist country,” Merritt said. “It doesn't work.”

The plan to go at it without federal assistance is ambitious, and it's not without risk, especially when you consider the scope: It's not just housing. They intend to provide food, clothing, as well as job-training and counseling, and hope to have self-sustaining hydroponic and aquaponic farming on site.

“There's a lot of people who say this isn't a self-sustaining model,” Merritt told Task & Purpose. “We don't know. This is a theory… What I believe, and what the government is starting to understand is that these issues have to be solved on a community level, specifically on a local level.”

On the whole, veteran homelessness is on the decline. A Nov. 1, 2018 report from the Department of Housing and Urban Development found that the number of homeless veterans in the United States has dropped by 5.4% since 2017, and by nearly half since 2010.

Though the veterans village model is more expansive than the “one individual at a time” approach the foundation has taken in the past, there's a limit on how many people can participate in the program at a time, as well as who is eligible.

“We're going after the veteran population, one: because it resonates with me, and two: these individuals have proved themselves mentally and physically capable of holding a job,” Merritt said. “There's a screening process to become a veteran.”

To live in the veterans village, participants will need proof of their military service in the form of a DD-214, and those with a Dishonorable Discharge will have their cases reviewed by the foundation's board, but Merritt stressed that “so long as they're not a threat to the population, or committed some egregious crime, then they'd be considered,” adding “there's good people who have made bad choices.”

When it comes to selecting who will participate in the program, Merritt said the approach is akin to triage.

“If we've got a hundred applicants for 10 spots then, the question becomes: Do you have the markers of success?” he asked. “If there's individuals who are enthusiastic, who have some abilities to allow them to transition through this program faster, then we're going to help them first.”

“If I focus my attention on 10 individuals who I can get off the street in twelve months, and transition them to a job that affords them the ability to pay for an apartment, excellent,” Merritt continued. “Then I can go get another person.”

WATCH NEXT: Task & Purpose Goes To The NRA Annual Meeting