The number of armed private security contractors in Afghanistan has increased considerably since President Donald Trump took office, according to a review of Pentagon statistics. 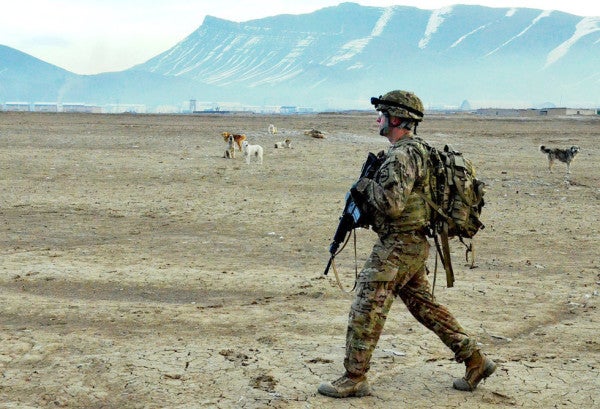 The number of armed private security contractors in Afghanistan has increased more than 65% since President Donald Trump took office, according to a review of Pentagon statistics.

The Pentagon's most recent report on contractor personnel numbers for the first quarter of Fiscal Year 2019 shows there are now 2,847 armed private security contractors supporting the Operation Freedom's Sentinel mission in Afghanistan, up from the 1,722 armed contractors it reported in Jan. 2017.

The use of armed security contractors seemed to be on the decline during President Barack Obama's last year in office. In Jan. 2016, there were 1,083 armed contractors in Afghanistan, and in the following months, the number fluctuated but never rose above that level before it settled at 813 armed contractors reported in October.

By the time the next report was issued in Jan. 2017, however, there were 1,722 armed contractors in Afghanistan, more than double the number deployed under Obama. It wasn't clear from the report whether the surge in contractors was a last minute decision by the outgoing administration, or a change initiated after Trump became commander-in-chief.

Col. Dave Butler, a spokesman for the U.S. mission in Afghanistan, explained that the increase in armed contractors was “primarily due to an administrative change in manning from shifts of 12 hours to shifts of eight hours in order to reduce fatigue on employees and improve coverage for when employees are unavailable due to leave, illness, or other events.”

“The numbers of contractors routinely fluctuate in all mission categories as a result of requirements and overlapping personnel assignments,” Pentagon spokeswoman Heather Babb said in a statement to Task & Purpose. “The DoD may contract for private security functions to fulfill non-combat requirements for security in military operations or exercises, and there is a robust framework of law, policy, regulations, and standards that address the use of private security contractors.”

Meanwhile, a Jan. 2018 contractor report mentioned the “the expected Force Manning Level increase will drive an increase in contracted support requirements thus increasing contractor footprint” — a reference to the cap on the number of troops allowed in Afghanistan. There are currently about 14,000 U.S. troops in Afghanistan, according to CNN.

Still, there's no doubt the use of armed security contractors has increased considerably on Trump's watch.

The increasing number of armed contractor jobs in Afghanistan have mostly been filled by “third country nationals” or local Afghans, according to the statistics. Of the 2,847 assigned to the DoD in Afghanistan, 84% were non-American, compared to 71% reported in Jan. 2017.

However, that same report also outlined incidents of abuse from 2006 to 2009:

… private security contractors escorting supply convoys to coalition bases have been blamed for killing and wounding more than 30 innocent civilians in Afghanistan's Maywand district alone, leading to at least one confrontation with U.S. forces. And in May 2010, U.S. and Afghan officials reportedly stated that local Afghan security contractors protecting NATO supply convoys in Kandahar “regularly fire wildly into villages they pass, hindering coalition efforts to build local support.” One officer from a Stryker brigade deployed in Afghanistan was quoted as saying that these contractors “tend to squeeze the trigger first and ask questions later.” And unlike in Iraq, where a series of high profile incidents involved U.S. security personnel, in Afghanistan, many of the guards causing the problems are Afghans.

“Using local nationals as security contractors can also provide a number of potential benefits, such as providing jobs, building relationships and developing contacts with the local population, and having a security force that has a better understanding of the region. However, local nationals are often more difficult to screen and can be more easily infiltrated by hostile forces,” the report said.