The Trump Military Buildup Has Begun With DoD’s Proposed Budget

For years, the U.S. military has had to do more with less, but the Defense Department’s proposed budget for fiscal... 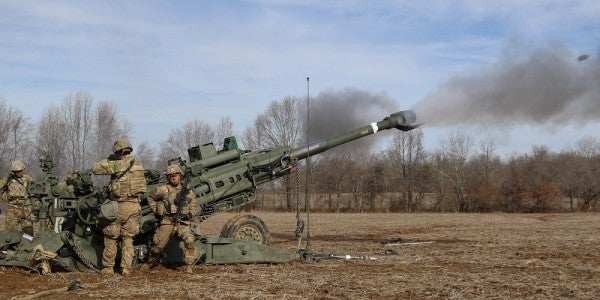 For years, the U.S. military has had to do more with less, but the Defense Department’s proposed budget for fiscal 2019 would add nearly 26,000 service members across the active-duty force, National Guard and reserves.

The plus-up reflects the National Security Strategy’s requirements that the Defense Department reverse the post-Iraq and Afghanistan drawdowns that led to the U.S. military in 2016 being the smallest it had been before World War II, said Defense Department Comptroller David Norquist.

By fiscal 2023, the U.S. military expects to add a total of 56,600 service members, Norquist said Monday at a Pentagon briefing. The additional troops will allow the Defense Department to add units such as the Army’s Security Force Assistance Brigades as well as recruit pilots, maintainers, and cyber security experts, he said.

Under current plans, the Marine Corps would only grow by 1,400 active-duty Marines over the next five years, despite the Corps’ internal force structure review, which recommended that the service increase its active-duty end strength from 185,000 to at least 194,000 Marines.

“Each of the services took a look at what it takes to improve their readiness and their capability,” Norquist said. “In some cases, it’s additional end strength and in some cases it’s additional training. In other cases, it’s moving more things to maintenance for readiness. You’ll see some variation between them. It’s not a matter of emphasizing one service over the other. It’s a recognition on their part of what they need to be effective.”

The proposed budget would allow the Army to grow to 487,500 active-duty soldiers, budget documents show. The service is authorized to increase its active-duty end strength from 476,000 to 483,500 in fiscal 2018, but Congress has yet to pass appropriations legislation that would fund an increase for this fiscal year.

If Congress funds the end strength increase, the extra soldiers will “reconstitute lost capability that resulted from a smaller force designed to face a different threat,” Chamberlain said.

“These forces will be used to increase the Army’s lethality and capacity by resourcing specific units such as fires, air defense, logistics and others,” he said.

Meanwhile, the Navy plans to “eliminate gaps at sea” by increasing its active-duty end strength by 7,500 billets through a combination of recruiting and retention, said Rear Adm. Brian E. Luther, deputy assistant secretary of the Navy for budget. That would increase the Navy’s active force to 335,400 sailors, he said.

In order to compete with the private sector, the Navy Department’s proposed budget would “substantially increase both enlistment and retention bonuses,” said Luther, who did not have details on individual bonuses and incentives.

For the Air Force, the extra 4,700 airmen would be used for intelligence, drone operations, cyber missions and other squadron needs, officials told Task & Purpose.

While the proposed budget promises to make the U.S. military bigger, there is no guarantee that Congress will approve the required funding on time. The Defense Department is currently being funded by a temporary spending measure that is set to expire in March — six months into the current fiscal year.

Congress recently reached an agreement for overall spending levels in fiscals 2018 and 2019, but appropriators still need to pass legislation for both fiscal years.

The two-year agreement does not guarantee that the proposed defense budgets will pass as submitted. Lawmakers are responsible for reviewing and approving each line item in both requests — and making changes where they deem necessary.

For the past decade, the U.S. military has been grappling with budget instability as Congress has started each fiscal year with temporary spending measures instead of appropriations legislation. The fact that lawmakers have agreed to a dollar figure for the fiscal 2019 defense appropriations makes it less likely that Congress will once again pass a temporary spending measure in October — but since this is an election year, it is entirely possible that Congress will wait until after the midterm elections to vote on the defense budget.

Sen. Joni Ernst, R-Iowa, said on Monday that she is taking a close look at whether the proposed budget meets the U.S. military’s current and future needs.

“With any budget, it’s critical that we determine how to effectively and efficiently use our dollars to strengthen and modernize the force so we’re prepared to not only counter aggression by adversaries, such as North Korea or Iran, but also near peer competitors, such as Russia and China,” Ernst said in a statement. “I look forward to reviewing the president’s proposal further and continuing discussions with my colleagues on how we can protect our interests at home and abroad, all while being better stewards of taxpayer dollars.”

While the proposed troop increases are a step in the right direction, the U.S. military remains too small to fight two wars at the same time, said retired Marine Lt. Col. Dakota Wood of the Heritage Foundation think tank in Washington.

At the height of the Iraq war, the Army wanted to grow to 48 brigade combat teams, but it stopped growing when it reached 45 brigade combat teams, said Wood, primary author of a study that recommended drastically increasing the size of the U.S. military, which President Trump has endorsed.

“So that right there was a signal that they needed more capacity in the Army, just to sustain those operations against an irregular opponent — no opposing air, no artillery, no armor, no meaningful logistical capabilities, as you would expect in a large-scale conventional fight,” Wood told Task & Purpose.

Since 2012, the Army has shrunk to 31 brigade combat teams and the Marine has contracted from 27 to 23 active-duty battalions, he said. The extra 1,100 Marines called for in the fiscal 2019 budget would allow the Corps to add cyber operators and aircraft maintainers, but it wouldn’t increase the number of operational units.

Wood has advocated for the U.S. military to be large enough to fight a major conflict while having the capacity to respond to another emergency.

“It doesn’t mean that we plan to be in two wars simultaneously, but if you have enough to handle one major contingency and not much left over, you don’t have much deterrent value,” Wood said.