Whatever else could be said of President Donald Trump’s successful campaign, he made one promise clear: On his watch, the... 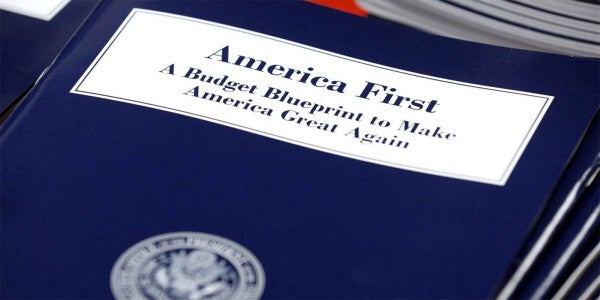 Whatever else could be said of President Donald Trump’s successful campaign, he made one promise clear: On his watch, the U.S. military would get a “historic” budget boost.

“As soon as I take office, I will ask Congress to fully eliminate the defense sequester and will submit a new budget to rebuild our military,” Trump said in a highly touted national security speech last September in Philadelphia. “This will increase certainty in the defense community as to funding, and will allow military leaders to plan for our future defense needs.”

The reality is different.

Trump’s 2018 budget plan for the Department of Defense, which have circulated around Washington over the past week, not only represents a small spending increase over what the outgoing Obama administration recommended — far short of what defense hawks say they want — but also comes at the expense of some veterans’ and federal retirees’ benefits.

What’s more, the Trump administration, weakened by the president’s ongoing self-made legal and political problems, hasn’t taken any steps in Congress to eliminate the 2011 Budget Control Act, which caps federal spending, including on defense.

Both Obama and Trump offered 2018 defense budget proposals that would exceed the 2011 sequester’s caps on military spending, which was set at $549 billion. The Obama plan earmarked $584 billion for defense, while Trump’s proposal gives the DOD $603 million — “roughly 3% more than what President Obama had suggested for this year,” Republican Rep. Mac Thornberry of Texas, chairman of the House Armed Services Committee, told the Washington Examiner.

“I think it is fair to say it's basically the Obama approach with a little bit more, but not much,” Thornberry added. He has proposed adding $40 billion over what Trump wants for the military.

Thornberry is not alone among military conservatives who are giving Trump’s budget proposal a skeptical eye; it’s “middle of the road, vanilla stuff,” Mackenzie Eaglen, a defense analyst with the conservative American Enterprise Institute, told Defense News on May 22. “It’s a budget that is in line with recent historical precedent and is nothing extraordinary or historical.”

Trump had promised to check what he called “destructive policies… under Obama-Clinton” by raising 13 more battalions of Marines, building 74 more naval warships, and getting the Air Force to 1,200 fighter aircraft.

None of those ambitions made it into his budget proposal. As Business Insider noted this morning, Trump's budget “asks for 70 Lockheed Martin F-35s, 14 Boeing F/A-18E/Fs, and eight new Navy ships — just like Obama's expectation for the upcoming fiscal year.”

Even so, Trump’s modest defense spending increase has to come from somewhere in the federal budget, and much of the offsetting comes from cuts to domestic social programs and the State Department. But some cuts will also impact veterans and military support personnel, including a $700 million haircut to TRICARE.

Military Times’ Leo Shane reports that the budget proposal would also round vets’ cost-of-living adjustments down to the nearest dollar — a proposal that veterans groups have shut down in the past. It would also totally cut COLA increases for certain civilian federal retirees, and would cap expensive tuition payouts to flight schools for GI Bill recipients.

Those moves would net Uncle Sam “almost $42 billion in savings over 10 years” — the Pentagon equivalent of chump change.

But experts say Trump stalwarts shouldn’t get discouraged over his defense budget plans just yet.

“The fact that this budget is not a significant change should not come as a surprise,” Todd Harrison, the top budget analyst at the Center For Strategic and International Studies, wrote in his rundown of the Trump plan last week. “The first budget request of a new administration often does not change much from the last request of an outgoing administration. It is not until the second budget request that a significant change is usually evident.”

However, Harrison told Military Times’s Shane, the overall Trump budget’s spending cuts could “even spook some fiscal conservatives” and doom it to failure in Congress.

“Dead on arrival,” he said, “is an understatement.”