The Pentagon officer in charge of the F-35 stealth fighter jet program confirmed Thursday that the chief executive of Boeing... 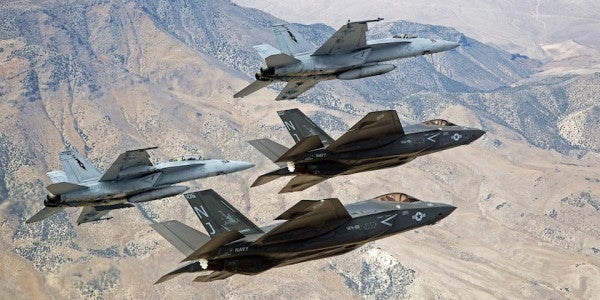 The Pentagon officer in charge of the F-35 stealth fighter jet program confirmed Thursday that the chief executive of Boeing was listening in on the line when then-President-elect Donald Trump called him in January to discuss the program's costs.

Earlier Thursday, Bloomberg reported that when Trump called Bogdan about the F-35 in January, the chief executive of Lockheed Martin’s primary rival, Boeing, was in the room listening in on the call. Trump “clearly identified” that Boeing chief executive Dennis Muilenburg was on the call, Bogdan said Thursday after testifying before a congressional panel.

The reason Boeing was on the call, Bogdan said, was that they were partly discussing the presidential airplane, which Boeing manufactures and Bogdan has no role in. They were also comparing the F-35 with the Boeing-made F/A-18 Super Hornets, “to figure out what that right complementary mix is,” he said.

Because Bogdan said he did not have answers for a lot of the president's questions, which he described as “very, very good questions,” the phone calls laid the foundation for Defense Secretary James Mattis' request for a review of the F-35 program.

The fact that the president called Bogdan directly at all represents an extraordinary breach of the chain of command — though the panel’s chairman, Rep. Mike Turner, R-Ohio, noted with a smile that Bogdan could handle the situation.

Including Boeing on the call adds another unorthodox aspect to Trump’s negotiations with the relevant parties, which he has punctuated with occasional tweets and public statements assailing the F-35’s costs.

Trump sent shockwaves through the Dallas-Fort Worth area in December when he teed off on the F-35 program, complaining that costs are “out of control” for the fighter jets. Defense contractor Lockheed Martin assembles the F-35s at the company’s plant in Fort Worth, where the program directly sustains thousands of jobs around the area and even more jobs indirectly around the state.

Bogdan told the House armed services committee subpanel on Thursday that the program is “much different and improved” than it was when he took over five years ago and pledged to continue to look for ways to drive down the cost of the planes.

But after withstanding the scrutiny of President Donald Trump in recent months, the lieutenant general received a friendlier welcome from the House armed services subcommittee that has become acutely familiar with the intricacies of the F-35 program over the years.

Turner said affordability has always been an oversight concern for the committee and will continue to be with the added national focus on the issue.

“We welcome the president’s attention and the effect that this may have on the overall cost,” he said.

Buoying Bogdan’s presentation was the recent news of the F-35’s strong performance at the Red Flag training exercise at Nellis Air Force Base in Nevada.

But while much of the hearing focused on the specific capabilities and costs of various fighter planes, the explosive news that had surfaced overnight overshadowed the proceedings. Bogdan told the panel that he appreciated the opportunity to clear the air about what exactly had transpired in his unusual conversations with Trump.

Lockheed chief executive Marillyn Hewson appeared to appease the outspoken president, at least for now, when she credited him last week with helping to bring down the costs for a new round of F-35 jets — even though the reduced costs had already been in the works for months.

Lockheed trimmed about $600 million from the F-35 program’s cost in its most recent contract with the Pentagon, selling the fighter jets for under $100 million a piece, down from $102 million in an order last year. Defense Secretary James Mattis has also directed his department to review the F-35 program to find ways to “significantly reduce the cost.”

“President Trump’s personal involvement in the F-35 program,” Hewson said in a written statement, “accelerated the negotiations and sharpened our focus on driving down the price.”

To Rep. Marc Veasey, D-Fort Worth, Hewson’s generous statement was a smart move.

“[Trump] has the sort of ego that needs to be fed, and I think that was probably enough to keep him satisfied for right now,” Veasey said.

Veasey, who serves on the panel that probed Pentagon officials Thursday, said he believes the F-35 program “is in a really good place right now” and he posited that most members of the committee recognize the value of the stealth fighter jets, even with the cost complications.

“Of course everybody wants to help get the price down,” Veasey said, but he argued a better avenue for reducing costs would be to lift the federally mandated budget caps, known as sequestration, that restrict military spending.

Beyond Veasey, the F-35 program has another prominent Fort Worth-area defender on Capitol Hill in Republican Rep. Kay Granger. Lockheed breathed a sigh of relief last month when Granger was appointed chairman of the powerful defense appropriations subcommittee, which oversees the Pentagon’s budget. But she has also signaled openness to Trump’s desire to “watch every penny we’re spending.”

Detractors in the defense industry have assailed the F-35 program for years, labeling it “the plane that ate the Pentagon.” Some critics, like ex-Marine Dan Grazier, a fellow at the Project for Government Oversight, called for using Trump’s explosive comments as an opportunity to “drastically change the direction of this disastrous program.”

“If the Pentagon and Lockheed Martin still can’t field a useable system after 25 years of development, it seems hardly likely that there is any hope for ever redeeming the F-35,” Grazier wrote in a January blog post for the watchdog group that has long disapproved of the F-35 program.

“Now may be the right time to cut our losses and reinvest the money in some better-conceived fighter programs that quickly expand our decimated air-to-air and close air support forces — and to do so with planes that are demonstrably more combat effective than the F-35,” he added.

But proponents of the F-35 insist that the program is already showing promising signs of improvement and remains an essential component of America’s future military efforts.

“The bottom line on F-35 is that it is America's best bet for deterring war in Europe, facilitating expeditionary warfare in austere settings, and assuring the future relevance of Navy aircraft carriers,” wrote Loren Thompson, an air defense expert at the Lexington Institute, which receives funding from Lockheed, in a recent Forbes article.

Jamie Morin, who recently left the Pentagon after two and a half years at the helm of the department’s cost assessment operations, said last month the F-35 program “has performed pretty close to the estimates” and predicts there will be more progress “as the operators start getting their hands on it.”