We Can’t Stop Drooling Over This DeLorean Monster Truck

The 1980s: a magical time filled with big hair, acid-washed jeans, monster truck rallies, and film icons — like the... 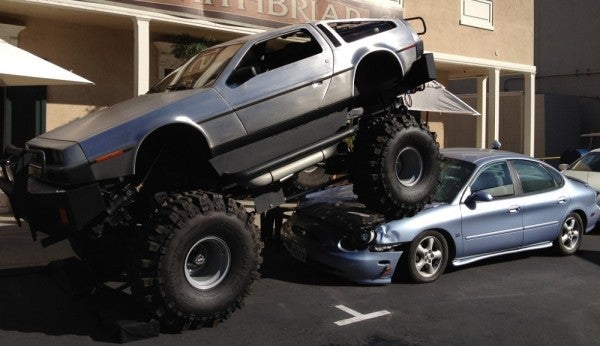 The 1980s: a magical time filled with big hair, acid-washed jeans, monster truck rallies, and film icons — like the star of “Back to the Future.” That’s right: I’m talking about the DeLorean DMC-12.

Ah, the brushed-stainless-steel-finish, low-profile DeLorean — probably the only sports car known more for its doors than its engine. What could be a greater tribute to the 80s’ monster-truck kitsch than a pimped-out, gargantuan-wheeled, car-eating DeLorean? Nothing. That’s what.

Rich Weissensel, a diehard fan of the brand, masterminded this time-travelling, engine-roaring four-wheeled monster. Because the DeLorean hasn’t been in production since “E.T.” was in movie theaters, Weissensel scoured junkyards and dealerships, for the parts he needed to turn your run-of-the-mill DeLorean into the “D-Rex” in just one month.

It’s a hybrid, the body of a DeLorean DMC-12 welded to parts from the wrecked chassis of a Chevy K5 Blazer — including a Chevy 350 V8 engine and a rear-mounted 20-gallon fuel tank, among many other bits and pieces, Weissensel told Task & Purpose.

And that’s not the only DeLorean creation he’s pieced together over the years. He’s got a DeLorean limo and a hovercraft. A hovercraft. (No flux capacitor, though.)

The only way this could be a more fitting 80s tribute would be if the (non-digital) radio played only Duran Duran and U2. Like music, hipsters will probably find a way to ruin this truck, too.