An Army sergeant was awarded the Soldier’s Medal on Monday for heroically saving a man from a burning vehicle last... 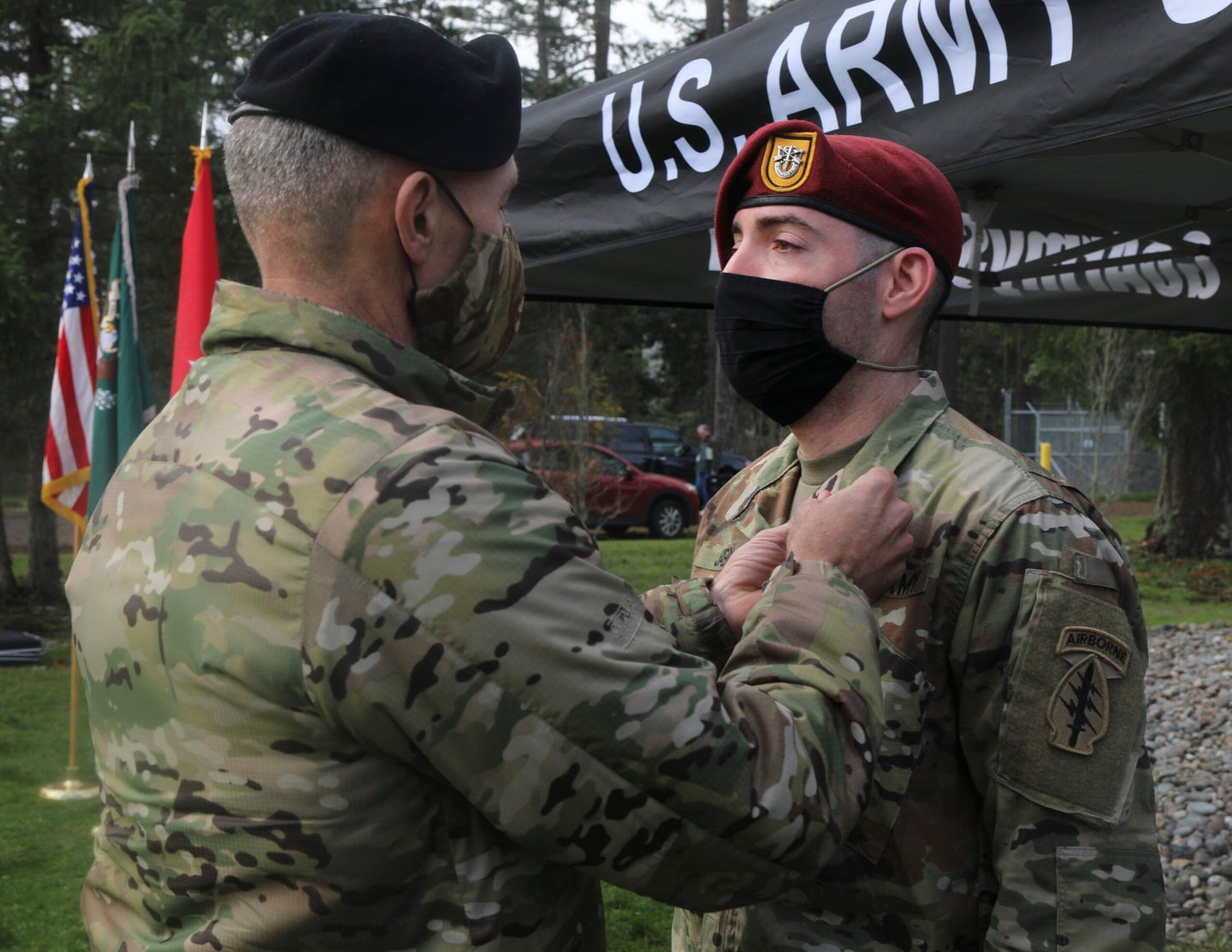 An Army sergeant was awarded the Soldier’s Medal on Monday for heroically saving a man from a burning vehicle last year.

On March 16, 2019, Sgt. Alexander Jabin, a satellite operator/maintainer with the Headquarters and Headquarters Detachment, 4th Battalion, 1st Special Forces Group (Airborne), was at Joint Base Lewis-McChord when a car caught on fire with the driver stuck inside, according to an Army press release.

A noncommissioned officer on-duty near the scene, Sgt. Komi Amenyo, said in the release that Jabin “ran past me” calling for someone to call the fire department, and “dove quickly under the fence and ran to the car which was on fire.”

Two other soldiers who were assigned to 1st SFG(A) at the time — Spcs. Josiah Caro-Yost and Aaron Cavazos — had already arrived to the scene of the accident, but found that the driver of the vehicle was stuck. Cavazos said that they backed away as the fire got more intense, which is when Jabin “immediately rushed in and attempted to free the driver.”

Jabin said in the release that he “tried to rip the door open” but could only “rip off some of the car parts.” Instead, he realized he needed to cut away the seatbelt in order to free the driver.

“I went back under the fence, yelling for someone to get me a knife to cut the seatbelt,” Jabin explained. “Sgt. Amenyo tossed me his knife, but then I looked and immediately noticed that the flames had engulfed the car and the driver had caught on fire.”

The man was able to stick his upper body out of the driver’s side window and was screaming for help, the press release says. Jabin said he figured he could be pulled out of the window, so he rushed back and did just that.

He, Cavazos, and Caro-Yost then worked to smother the flames still on the man’s body. Jabin used Amenyo’s knife to cut away his burning clothes.

Jabin, who sustained second-degree burns to his face, arms and hands during the rescue, said that he simply did “what anyone else would have done in my position,” but emphasized that he “did not same him by myself.”

“In the Army, no one succeeds alone,” Jabin said. “I did my part alongside others.”

But  Lt. Gen. Randy George, commander of I Corps and JBLM, said during the award ceremony on Monday that Jabin’s “discipline, your expertise, your fitness, your presence of mind, amidst so much uncertainty and danger…saved another person’s life.”

“The words ‘Soldier’s Medal’ and ‘for valor’ are etched into the backside of the medal,” George said. “Sgt. Jabin absolutely personified these words…as he reminded us by his actions, what a ready soldier looks like. Acting with initiative, he moved quickly to save another person’s life, and he did this at the very real risk of sacrificing his own life.”