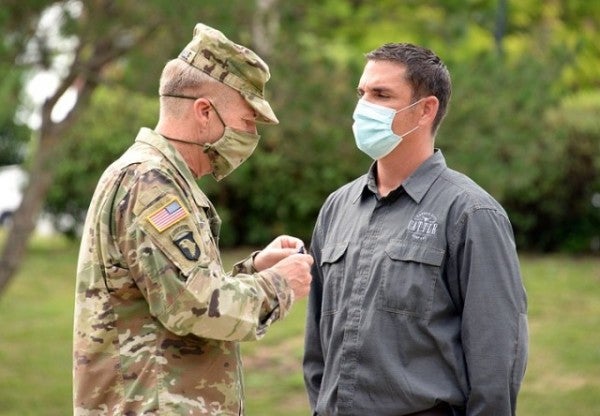 A former soldier who stopped an active shooter in Illinois this past May was awarded the Soldier's Medal on Thursday for his “bold and heroic actions.”

Then-Master Sgt. David Royer, who has since separated from the Army, was still on active duty with the 705th Military Police Battalion (Detention), 15th MP Brigade at Fort Leavenworth on May 27, when he was in traffic on the nearby Centennial Bridge.

Royer was speaking to his fiancé on speaker phone when the shooter exited a vehicle and started shooting a rifle at other vehicles on the bridge, he said in an Army release.

Royer told his fiancé to call 911 before hanging up, and quickly assessed the situation. He said that he “took the only action possible that I felt I could take.”

“I accelerated my truck as quickly as possible and struck the active shooter and pinned him underneath my truck,” Royer, who separated from the Army on June 22, said in the release.

One other active-duty soldier was injured in the shooting and the gunman was taken to the hospital in serious but stable condition.

Royer's award citation from Army Secretary Ryan McCarthy said his “quick thinking … saved lives of countless bystanders and others in the community.”

Gen. James McConville, Army chief of staff, presented the Soldier's Medal to Royer in a ceremony on Thursday at Fort Leavenworth.

“It’s hard to say what inspires soldiers at the risk of their own lives to intervene and to save other soldiers, but that’s exactly what Master Sergeant Royer did on that day,” McConville said, per the Army's release. “He risked his own life to save others, and we’re very, very proud of his actions that day.

“Every generation has its heroes and Master Sergeant Royer is one of ours today.”