After months of focusing on modernization priorities, Army leadership plans to tackle persisting personnel issues in the coming years. 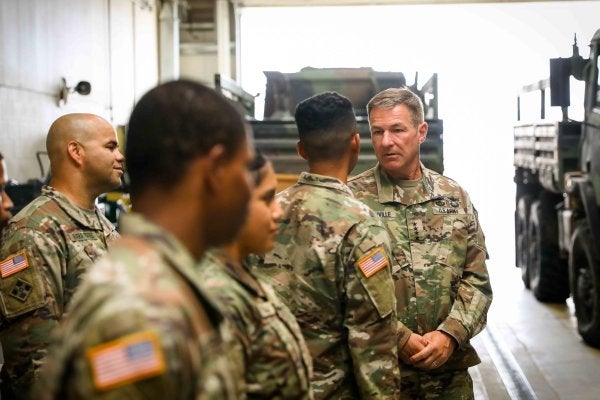 After months of focusing on modernization priorities, Army leadership plans to tackle persisting personnel issues in the coming years.

Acting Army Secretary Ryan McCarthy said Tuesday at an event with the Foundation for Defense of Democracies that what people can to hear service leadership “talk a lot about … our people. Investing in our people, so that they can reach their potential. … We are a people organization.”

Lucky for McCarthy, newly-confirmed Army Chief of Staff Gen. James McConville is a bit of a people person. He told the Senate Armed Services Committee during his nomination hearing that people “will be my number one priority.”

“Winning requires unit cohesion, a cohesion built on a foundation of trained, disciplined, and fit soldiers who treat each other with dignity and respect,” McConville said at the time. “Therefore, I am committed to the eradication of sexual assault and harassment in our Army. I am committed to dramatically reducing suicides among those who serve and our Army veterans. … I am committed to delivering critical services such as quality housing, health care, and child care.”

McCarthy echoed those same thoughts on Tuesday, saying the “statistics are going the wrong way.

“Gen. McConville and I and other folks have talked about … the focus on, really, the squad. Are we being good teammates? Are we communicating with each other?” McCarthy said. “We're not engaging with our teammates. So clearly we have to do something different, suicides and sexual assaults — the numbers are on the rise. And that's the type of approach we're going to take going forward, because we've got to get better.”

They have their work cut out for them. In 2018, suicides in the active-duty Army reached their highest level since 2012; in addition, the Army saw an 18% increase in reported sexual assaults over 2018.

And it's no secret that military housing is still a primary issue for families everywhere. Just last week, families in a neighborhood at Fort Bragg had a carbon monoxide poisoning scare because the placement of their HVAC.

While the Army has made steps forward in addressing its housing crisis — launching a registry to help track health complaints caused by housing, and a Tenant Bill of Rights announced by all the service leaders — many families worry not enough will change to keep the housing companies accountable.

McCarthy said on Tuesday that part of getting the housing issue “back on the rails” is finding out how the companies have been managed and gathering the relevant information and data on customer satisfaction, wait times on work orders, and more.

“Some of this is us,” McCarthy told reporters at FDD. “So we had to go look at this and see, what are the metrics of performance … what were the authorities you have to give to an installation commander, what's the information they have to gather from the contractor? We own all the data, we pay for it, but if you don't ask for it, the companies won't give it to you. So you've got to get the information and you've got to grade it and you've got to tell them, 'Fix it or we're going to withhold fees.'

“We're going to introduce some things this fall to improve the relationship, and a lot of it too is an informed customer and the customer has to know what is in their rights living in that house,” he added.

Another piece of the personnel puzzle that McConville is focused on, is finding what talents soldiers have already brought into the Army, and how best to utilize them.

“What we want to do is start treating people like they're not interchangeable parts and start aligning them by their talents with the right jobs,” McConville said, per an Army release.