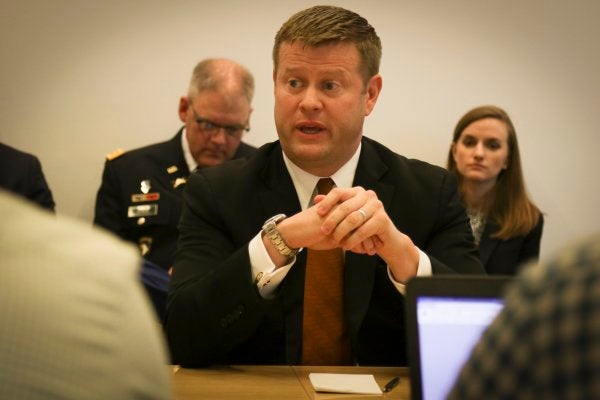 Army Undersecretary Ryan McCarthy got right to the point on Tuesday when he told reporters that the service's deteriorating housing conditions are “embarrassing,” and that leadership has “got to do better.”

“Any time that there are challenges for the homes of our soldiers and we're not doing anything about it, it's embarrassing,” McCarthy said. “It's a reflection on me, and every leader in the Army. We've got to do better.”

Army leadership has been zeroing in on housing deficiencies after a bombshell Reuters investigation exposed hazardous conditions, spurring pointed calls for change from lawmakers.

“I really truly am grateful that the media saw this, and that those families had the courage to step up and speak,” McCarthy said. “We can address this and fix it.”

Dailey also joined Army Secretary Dr. Mark Esper and Chief of Staff General Mark Milley in a visit to Fort Meade, and the three met at the Pentagon with senior executives from seven contracting companies to “discuss ways to fix immediate problems.”

Down in Texas, Fort Hood is “taking concrete actions” after a series of town hall meetings over the last week during which soldiers and their families described mold, roach and snake infestations, lead paint, and more.

According to a Fort Hood press release, 100% of on-base homes and barracks will be visited by command teams by no later than March 18th to “ensure issues…are sent to the appropriate maintenance department for resolution.”

On Tuesday, McCarthy mentioned the “Tenant Bill of Rights” as a way of empowering the customer “to be able to get every penny of their deal that they're paying for that lease.”

The bill of rights — which CEOs of the seven contracting companies agreed to work on after meeting with Esper, Daily and Milley —would allow families in private housing to withhold rent payments if the service they're receiving is unsatisfactory.

Senior leadership around the country have been tasked by Esper, Milley and Daily to “immediately” begin increasing oversight on housing conditions, including personally holding town halls to allow residents the chance to voice their concerns and conducting inspections “installation-wide,” an Army press release said.

SEE NEXT: The Pentagon claims everyone loves military housing. A new survey of families says otherwise