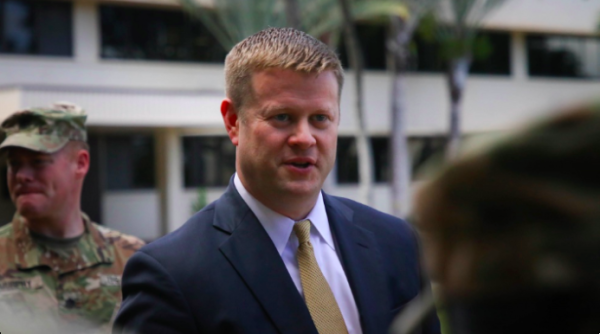 In early 2001, Ryan McCarthy was on his way out of the Army.

The Army Ranger had been in the infantry since September 1997 and his service obligation had ended. He had the option to get out, and was planning on taking it.

But that, along with everything else, changed on September 11th. His unit was called to Afghanistan, and he decided to stay. Though his former battle buddy Dan Ferris, a retired Army lieutenant colonel who served alongside him in the 75th Ranger Regiment, said it wasn't even a question.

“Ryan was like, 'There's no way in heck that I'm leaving. I'm staying and I'm going with you guys.' He was just completely dedicated to getting out there and defending our country with all of us,” Ferris told Task & Purpose.

McCarthy was among the first boots on the ground during the invasion of Afghanistan. After graduating from the Virginia Military Institute, McCarthy went on to serve for five years, deploying to Afghanistan from October 2001-February 2002, and earning three Army Achievement Medals, the Armed Forces Expeditionary Medal, Combat Infantryman Badge, Ranger Tab, and Parachutist Badge, among others.

On Monday, the 45-year-old Army Under Secretary was nominated by President Donald Trump to be the top civilian in charge of the U.S. Army, replacing Mark Esper as Army Secretary, who was confirmed as Secretary of Defense in July.

It's not McCarthy's first time in the top job. The Chicago native had been temporarily in the role of Army Secretary twice now — once in the fall of 2017 before Esper was confirmed, and again recently when Esper was named the Acting Defense Secretary.

In 2017, McCarthy played a key role in the development of Army Futures Command, the Army's crown jewel that has hurtled the service into an era of modernization. Retired Army Gen. Peter Chiarelli, former Army Vice Chief of Staff, commended him on that work, calling it “absolutely brilliant.”

McCarthy takes over during a critical time for the Army. The U.S. military is facing down a number of conflicts across the world stage — looking ahead to future fights with adversaries like Russia and China; balancing the ever-present Iran threat; and lest we forget that the war in Afghanistan continues to rage on, with more than a dozen troops dying there since the beginning of the year.

“At its core, the Army is a people organization,” McCarthy told the Senate Armed Services Committee during his confirmation hearing in 2017. “Over the last 16 years, much has been asked of Soldiers and their families who have collectively fought the longest war in our nation's history while continuing to meet additional challenges worldwide.”

Former Defense Secretary Robert Gates, McCarthy's former boss, told Task & Purpose in a statement that McCarthy “would be an outstanding Army Secretary. He deeply loves the Army and would be amazingly qualified to lead it into the future.”

Total focus on the soldier

Given his military experience, those who know him say the American people can expect a total focus on providing the men and women in the Army with what they need to be successful.

“Ryan, I believe, combines all of the right attributes of a civilian political appointee in the Pentagon,” Former Secretary of Homeland Security Jeh Johnson told Task & Purpose. “He has the boots-on-the-ground experience in Afghanistan as an Army Ranger, he has the E-ring experience in OSD and in the Department of the Army. … Ryan understands the day-to-day life of a soldier deployed, and I think that that is so important for our civilian leadership in the department.”

And if you ask McCarthy, he'll tell you that serving as Army Under Secretary is “the greatest professional honor” of his life, made better by his close work with soldiers.

“My favorite thing about this job is being around soldiers every day,” McCarthy told Task & Purpose in May. “The thing about soldiers is, the level of resilience, perseverance, and the commitment is really awe-inspiring when you're tired and you don't want to be there, and if you can put yourself in a position to enable them, it's extremely rewarding.”

A person close to McCarthy said he tries to attend every dignified transfer, and that it's very important to him to be there. And while that care likely grew organically given his five years of infantry military experience, Ferris said McCarthy saw first-hand what it looks like for senior Pentagon leadership to be mindful of their decisions when it comes to putting service members in harm's way.

Once, after returning from a deployment, then-Maj. Ferris made a stop by the Pentagon to see his friend, who was working for Gates at the time. McCarthy took him into the room where Gates would sign deployment orders, Ferris said, and on the wall was a photo of a fallen Marine — Capt. Douglas Zembiec, the “Lion of Fallujah,” who died in Iraq in 2007.

“Every single time before he would sign , Secretary Gates would look over at that picture to remind himself of what the cost of his decisions are,” Ferris said. “And I think Ryan is very much like Secretary Gates in that sense. He understands the repercussions of his decisions on individual soldiers and their families, and he doesn't take that lightly.”

And how could he? It's personal. “It's hard not to be emotional” about the war in Afghanistan, McCarthy told Task & Purpose in May.

“Friends of ours have died there. People you really care about have been hurt,” he said. “There's still a great national security challenge in front of us. It's among, probably, the top two or three hardest decisions the Secretary and the Chairman have in advising the President.”

Last fall McCarthy addressed the graduating Ranger class of October 2018 at Fort Benning, Georgia, telling them they'll “get the toughest jobs under the worst conditions.” After all, he would know.

Ferris — who in 2001 lived with McCarthy (a clean roommate, according to Ferris) — recalled one time when the two had just returned from a winter training event and were watching a BBC wildlife program on TV. They watched a lot of Animal Planet, Ferris said. A wildebeest had collapsed from exhaustion, the show's narrator was explaining, solidifying a group of lions' attack.

McCarthy looked over at his roommate and joked: “Quitter.”

'His voice will be heard'

What's important to know about McCarthy, Chiarelli said, is that he's not someone who will sit quietly if something is being done that he doesn't agree with.

“There's no way he is going to back down from a position that he feels strongly. His voice will be heard,” Chiarelli said. “If there's anybody who will speak truth to power, it's — in my opinion — Ryan McCarthy.”

Ferris met McCarthy in the spring of 2000, while they were both platoon leaders in Alpha Company, 3rd Ranger Battalion, 75th Ranger Regiment. They lived together, ran in the same social circles, and served alongside one another in Afghanistan.

They've stayed in touch over the years, and Ferris said McCarthy has remained “a very humble … down-to-Earth person.”

But McCarthy also has “a sense of humor that's second-to-none,” Chiarelli said.

While working in Gates' office, Chiarelli said, McCarthy found out that then-Col. Mark Milley had a “weakness” for things advertised on TV.

“Milley — and he may have embellished this — used to say he had a room full of stuff,” Chiarelli laughed. “Some of it was absolutely useless, the gadgets you see on TV. I will never forget the day that Ryan McCarthy came in with one of those gadgets you get off of TV, and he showed it to Milley just to drive home the point.”

A source who has worked closely with McCarthy told Task & Purpose that he and Milley have a big brother-little brother relationship, and frequently tease each other (all in good fun, of course).

As a testament to his service, McCarthy was inducted into the Ranger Hall of Fame on July 10th at Fort Benning.

“Induction into this Hall of Fame humbles me,” McCarthy said during the ceremony. “And as Gen. Stanley McChrystal taught us, our creed is not a poem, but a promise. Our nation needs us to keep this promise — whether your mission is training Rangers here at Benning, hunting our nation's enemies in combat, or building a ready and lethal Army from Washington. I vow to you all, I will keep my promise. Rangers lead the way.”

Given that McCarthy has already been Senate-confirmed once before, it's likely it will be smooth sailing into the Secretary's office. But that doesn't mean it's a sure thing, especially given the organizational game of musical chairs that has defined Pentagon leadership during the Trump administration.

And if Esper's Senate confirmation hearing is any precedent, McCarthy's history as a Lockheed Martin executive could be a hurdle for some lawmakers.

When asked by Task & Purpose this month what his advice for McCarthy is as he takes his place, Esper responded jokingly: “Don't break anything.”

SEE NEXT: With Shanahan's Departure, It's The Army's World — And We're Just Living In It