The D.C. National Guard is investigating why this helicopter was hovering so low over protesters. 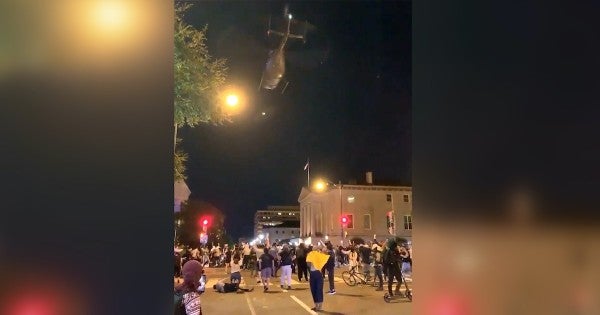 Defense Secretary Mark Esper has ordered an investigation into why a District of Columbia National Guard helicopter hovered extremely low over protesters in Washington, D.C. on Monday night.

Protesters in the nation’s capital were buzzed by several low-flying helicopters in an apparent show of force that evening, which hurtled debris and knocked down tree limbs on the street below, nearly hitting several people, according to The New York Times. It was not immediately clear whether some of the aircraft belonged to law enforcement agencies.

The D.C. National Guard has announced that it is investigating whether any of its aircraft broke procedures or safety regulations by flying so low, including an Army UH-72 Lakota medical evacuation helicopter that was caught on video hovering just above a demonstration, leading to speculation on Twitter that the aircraft was using its rotor wash to disrupt the protest.

On Wednesday, Esper said he ordered Army Secretary Ryan McCarthy to look into the matter shortly after learning that the helicopter belonged to the D.C. National Guard, which falls under McCarthy’s purview.

“I want to make sure I understand what happened; who was involved; what orders were they given or not given; was there a safety issue involved with an aircraft hovering that low?” Esper said during a Pentagon news conference on Wednesday.

The investigation will look into who specifically requested the helicopter fly over the demonstration, Esper told reporters.

While the helicopter appears to be performing a dangerous maneuver in the video by flying so low in a city, it would be allowed to do so if it were picking up a wounded service member, Esper said.

Uh why are helicopters in D.C swarming down on protestors? pic.twitter.com/uz5fUyaIPk

However, Esper conceded that the helicopter was not flying a MEDEVAC mission at the time.

Right now, it is clear whether the helicopter, which had a large Red Cross visible on the outside, was being used to intimidate the protesters, he said.

“I got a report back that they were asked by law enforcement to look at a National Guard checkpoint to see if there were protesters around,” Esper said. “So there’s conflicting reports. I don’t want to add to that. I think we need to let the Army conduct its inquiry and then get back and see where the facts actually are.”