Task & Purpose had a feeling the backpacked man at the protests was a veteran. 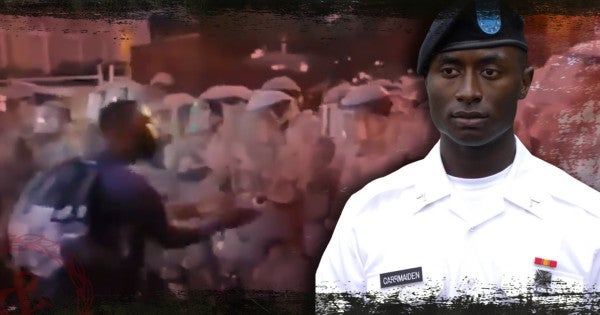 Shot during protests over the death of George Floyd in Washington, D.C. last week, it showed a man wearing a backpack going up and down a line of National Guardsmen, imploring them — or better yet, ordering them — to “close the gaps” so their broken phalanx would transform into one that would fill King Leonidas with pride.

Interestingly, the soldiers followed his advice.

“Tighten up! Look at these gaps right here! … Close the gaps, what are you doing?” the man yelled, as the person filming commented, “it's almost like a training that I'm watching now.”

This is how it’s done! Protesters in DC stayed all night and outlasted the Army National Guard. Right as day broke this protester gave a masterful and hilarious lesson on forming a phalanx. Credit to Kittykat Lounge on YT. pic.twitter.com/oZuJw1FPOB

The comment wasn't far off. Like others, Task & Purpose had a feeling the backpacked man at the protests was a veteran.

And as it turns out, the impromptu period of instruction on crowd control was taught by none other than a former D.C. Guardsman: Wayne Carr-Maiden, 25, who served with Charlie Co., 1st Detachment, 226th General Support Aviation Battalion from Oct. 2014 to March 2016, according to a National Guard spokesman.

The former soldier admits that during his time in uniform, he “got into a little trouble” and didn't finish his enlistment because he was unable to pass training to earn his occupational specialty of signal support specialist. A discharge document he provided to Task & Purpose showed he served in the D.C. Guard for more than a year as a PV2, leaving with a discharge of general under honorable conditions.

Still, Carr-Maiden says, he's trying to get back in to the service, which he joined after going through a program for troubled youth.

“If it wasn't for the Army, I'd probably be dead,” he said. “I have to go back [and] repay the military for saving me.”

Carr-Maiden, who lives in the southeastern part of the city, says he supports the protests against police brutality but became concerned by some in the crowd who were directing their anger towards soldiers instead of the police.

“Things can go from zero to 100 really quick,” Carr-Maiden said. “I would hate if my battle buddies get all this inappropriate slander thrown at them,” referring to protesters screaming profanity at Guardsmen.

He added: “They are just following orders to protect what they're told to protect.”

In the video, Carr-Maiden is seen clapping and telling soldiers to fill gaps in their ranks, and even playfully saying “good job sarge!” to one of the non-commissioned officers present. Another older protester can be seen aggressively repeating what he says. Carr-Maiden jokingly called him the “protest sergeant major.”

What wasn't seen, however, were the protesters throwing water bottles at soldiers, which led Carr-Maiden to try to mediate in his own way.

“I was serious,” Carr-Maiden said. “I see gaps, so I thought, 'let me tell the soldiers to fix what I see wrong.”

So that's what he did, he said, in addition to chatting with soldiers and trying to help tone down some of the more aggressive actions on both sides of the protest.

Related: 'Give me a chance to be seen’ — Navy vet-turned-police officer shares his struggle of being black in America

“I try to deescalate situations in the hood too with police officers and people on the block,” Carr-Maiden said. “I just try to find a middle ground.”

Protests in the nation's capital and elsewhere in the country have continued this week, and an estimated 100,000 people are expected to converge on D.C. in late August to push for criminal justice reform, according to The Washington Post.

“All they want is change,” Carr-Maiden said, urging protesters to remain peaceful and focus on their core message — black lives matter, and police brutality is wrong.

And to the soldiers in the Guard, Carr-Maiden had one message: “Keep your bearing. Stay focused, and embrace the suck.”