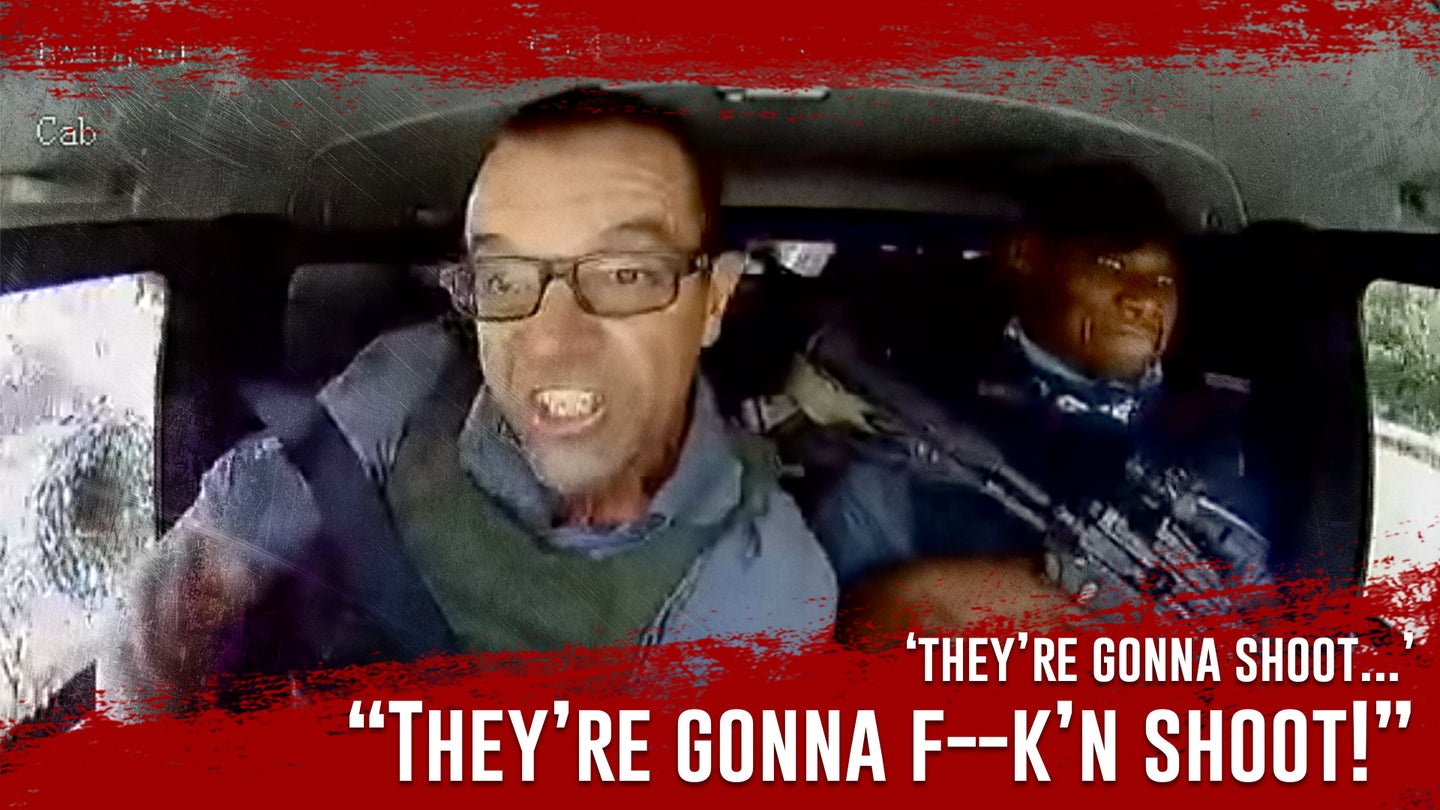 A massively viral video shows a pair of security guards driving an armored cash-in-transit truck in Pretoria, South Africa, when they are suddenly ambushed by armed robbers on a highway.

The entire encounter, from start to finish, was caught on the dashboard camera from inside their Toyota Land Cruiser. You see the guards’ reactions as the chase intensifies — the anxious glances to the side and rearview mirrors, the way one of the guards readies his partner’s rifle as he clutches his pistol in his other hand. The camera catches the moment their bulletproof windows become pockmarked by incoming rounds, like a high-caliber Jackson Pollock painting on polycarbonate. You hear everything they hear, from the ‘crack’ of incoming fire and the combination ‘smack-splatter’ of rounds impacting the windows to the low rumble of engines and the ‘thud’ as the would-be robbers’ car collides with the side of the armored truck. And the video keeps rolling as the attempted robbery concludes with one of the guards exiting his armored truck, rifle in hand, to lay in wait for their attackers. Miraculously, both guards came through the incident unharmed.

If I were to sum the clip up in as few words as possible, it’d be these: Max. Pucker. Factor.

The video opens with Leo Prinsloo, a former member of the South African Police Service Special Task Force — an elite branch of the country’s police force that specializes in high-risk operations. Prinsloo can be seen driving with another security guard, who was later identified only as Lloyd by the duo’s employer, Fortis Pro Active Defence Solutions, a private security company. The pair were conducting a cash-in-transit operation, which involves the physical transfer of valuables or money from one location to another. They were making their way along the N4 Highway in Pretoria on the morning of April 22 when the attempted robbery took place. As our colleagues over at The Drive pointed out, Prinsloo’s prior service with Special Task Force was confirmed by Fortis Pro Active Defense Solutions, where he is listed as the head instructor for one of the company’s courses.

Now, after watching the video for the second time — I had to get over my initial shock, then watch it again to make sure it wasn’t a scene from The Town — something dawned on me: Prinsloo maintains control of the situation the entire time. Given what’s going on, the guy is the picture of calm. His breathing gets a little rapid, sure, but that’s what happens when adrenaline is crashing through your system. (Lloyd, to his credit, remained composed as well — which is probably incredibly difficult to do when you’re stuck riding shotgun and bracing for the possibility that the encounter might end in a deadly shootout.)

Seeing as the footage is from the dashboard camera, it provides very little insight into what was going on outside of the vehicle. However, it paints a vivid picture of what it was like in the cab. So, we asked Benjamin Bunn — a former U.S. Army Special Forces soldier and combat veteran of the wars in Iraq and Afghanistan who served from 2000 to 2016 — to break down what we were seeing, given his experience with mobile urban assault training inside and around vehicles.

“The driver quite clearly was prepared,” said Bunn. “Stay buckled up and keep moving in a vehicle, and that’s exactly what that guy did and ensured he kept moving the entire time and drove out of what was more than likely a kill zone created by the people who tried to rob them.”

A kill zone refers to an area during an ambush that is saturated by direct fire. To put it in plain English: If you’re the one setting up the attack, that’s the spot where you wait for your target to enter before opening fire because it ensures they’re in the worst possible position. If you’re on the receiving end… that’s the spot you’ve got to get the hell out of.

“If you stay inside the kill zone, you’re gonna die,” Bunn said.

Of the robbers, Bunn speculated that they probably expected the truck’s security detail to put up minimal resistance, “usually because it’s untrained individuals” behind the wheel of a vehicle filled with valuable goods or currency, he said. “For criminals, particularly career criminals, I can imagine that seems like an easy target.”

“I don’t think most armored car drivers are jumping in with the intention of getting into a gunfight,” he added.

Ahead of the attack, it seems likely that the robbers “did a fair amount of recon” of the cash-in-transit vehicle’s route and then “waited for them in a spot where they could assault and overtake the vehicle and execute a classic ambush.”

As many current and former service members know from training and experience, there’s really only one option in that scenario: “If you’re in an ambush what you want to do is move out of, and assault through, a kill zone,” Bunn explained.

And that’s precisely what Prinsloo does in the video. As the attack starts, he immediately begins evasive maneuvers, weaving across the roadway, as he attempts to outrace what appears to be an Audi A5 Sportback, according to The Drive. Prinsloo’s vehicle and the Audi slam into each other at the same time as one of the robbers opens fire from a passenger seat in the back.

Footage from the outward-facing dashboard camera on Prinsloo and Lloyd’s truck, shared on Twitter by Barry Bateman, a reporter for eNCA in South Africa, offers a different vantage point of the encounter and appears to show a second vehicle — a pickup truck — was used by the robbers in addition to the Audi.

At one point Prinsloo can be heard saying “they’re gonna shoot, they’re gonna f–k’n shoot,” before telling Lloyd to “phone Robbie” and “phone Josh” and “ask them where they are.” A recent post from Fortis Pro Active Defence Solutions explained that Robbie and Josh were two other drivers who were on the road doing cash-in-transit operations at the same time, and Prinsloo wanted to make sure they weren’t under attack as well.

So in addition to controlling the vehicle, and the situation, all while under incredible duress, Prinsloo maintained enough situational awareness to know he needed to check in on his teammates, to ensure they weren’t in danger, too.

“I think that guy did a great job. He stayed calm, drove himself out of the kill zone.”

However, just because Prinsloo and Lloyd didn’t push for a fight, doesn’t mean they weren’t ready for one, as evidenced by the fact that Prinsloo tells Lloyd to ready his rifle, and that Lloyd remains armed throughout the encounter.

“He was prepared for that vehicle to be stopped or be deadlined,” said Bunn, referring to the possibility that the truck might have been rendered inoperable.

At the end of the video we see the armored truck stop — it’s unclear if it was stuck — and Prinsloo dismounts with his rifle.

According to a statement from the South African National Police that was provided to the website SA Trucker, “the driver of the CIT vehicle managed to evade the robbers for a while but later stopped in wait for the robbers.”

Not only did Prinsloo push through their ambush like it was just a bad day in rush hour traffic, after all that he got out of his car and set up an ambush of his own in the event the would-be robbers didn’t take the hint. Clearly though, they did, and according to the statement the attackers “fled without taking any money. No arrests have yet been made.”

Photos of the vehicle taken afterward show that the Land Cruiser, while worse for wear, was still largely intact, and both Prinsloo and Lloyd got through the ordeal unharmed. In the end, all I can really say is this: It’s got to be really hard for Prinsloo and Lloyd to get around, let alone drive, with those massive brass balls of theirs.

Update: This article has been updated with additional video from eNCA reporter Barry Bateman providing a vantage point from outside of Leo Prinsloo and Lloyd’s armored truck.