In a June 4 request for information, Marine Corps Systems Command detailed its vision for a lightweight system and designed to "provide an integrated head protection platform for infantry and infantry-like Marines" 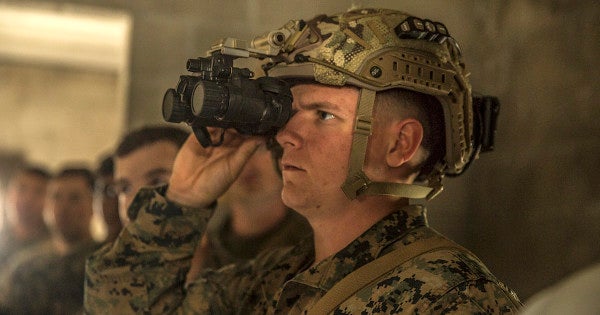 Just two years after the Marine Corps dropped $51 million to issue every single grunt a new lightweight combat helmet, the service is eyeing yet another newer, lighter combat helmet.

In a June 4 request for information, Marine Corps Systems Command detailed its vision for a lightweight system designed to “provide an integrated head protection platform for infantry and infantry-like Marines.”

Distinct from the service's existing Enhanced Combat Helmet (ECH). the so-called Integrated Helmet System (IHS) should weight between 2.91 and 3.84 pounds depending on size and come with a rail system that can host the usual slew of communications and night vision devices like the Squad Binocular Night Vision Goggles.

“With the increased number of battery powered optics and other attachments to the helmet, the amount of exposed/unsecure wires and battery packs are increasing,” the RFI reads. “The Marine Corps is looking for an optimized configuration to allow power and/or data to flow to the attachments while minimizing bulk.”

Marine Corps Times notes that the push for for a new combat helmet follows last year's evaluation of hundreds of high- to mid-level cuts of the the ECH, which is produced by Ops-Core special ops helmet maker Gentex Corporation.

While the Marine Corps awarded a fat contract for roughly 185,000 ECH to Gentex back in 2017, MARCORSYSCOM spokesman Manny Pacheco told Marine Corps Times that the IHS RFI is intended to design what the “future of ballistic helmets should look like.”

At the same time, Pacheco said that new IHS won't serve as a “complete replacement” for the ECH, which the Marine Corps started fielding to grunts back in 2014.

Still, any weight reduction is good news amid the Corps' ongoing push to shave extra pounds off of its standard issue kits for infantry Marines.

According to a May 2017 Government Accountability Office report on personal protective equipment improvement efforts, Marines fighting in Iraq or Afghanistan humped an average 117-pound load, well above the standard approach march load of 72 pounds.

By contrast, a new analysis by Marine Capt. Courtney Thompson indicates that Marines perform best with loads of between 50 and 75 pounds to increase mobility when facing off against adversaries downrange.

SEE ALSO: This Marine Captain Figured Out Exactly How Many Pounds Equal Pain In Combat