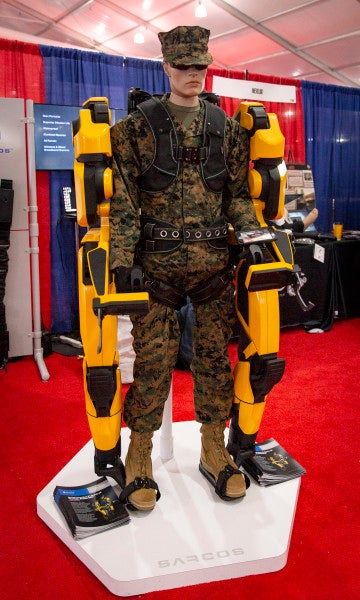 Grunts who spend their days hauling heavy gear or moving pallets of laden with equipment are about to get a major assist at the hands of a brand new robotic exoskeleton.

The Marine Corps Logistics Innovation Office has awarded a contract to Salt Lake City-based Sarcos Defense to furnish grunts with an Alpha version of its Guardian XO powered exoskeleton by the end of 2020, the company announced on Tuesday.

The full-body autonomous exoskeleton, which can stay powered for up to eight hours on a single charge, can repeatedly lift 200-pound objects without fatigue or strain, as Military.com reported last year.

“Instead of a team of four Marines, maybe you only need a Marine with this capability to offload pallets or move or load munitions,” Jim Miller, Sarcos Robotics' vice president of defense solutions, said at the time.

Marines first familiarized themselves with the Guardian XO exoskeleton at the Modern Day Marine exposition in Quantico, Virginia last year.

The Alpha variant was publicly unveiled earlier this year at the 2020 Consumer Electronics Show, according to Sarcos Defense.

“The Sarcos Defense team is very pleased that the U.S. Marine Corps will be testing use cases for our Guardian XO Alpha version this year,” Sarcos Defense CEO Ben Wolff said in a statement. “Our military branches need to regularly address changing personnel issues and reduce the risk of injury from performing heavy-lifting tasks.”

According to Wolff, the Air Force, Navy and U.S. Special Operations Command are all working with the company on their own powered exoskeleton technologies.

Now, the Guardian XO may look slick, but it ain't necessarily the P-5000 Powered Work Loader that Ripley uses to deal with the pesky xenomorph queen in the 1986 movie Aliens. Still, it's pretty damn close: