“People see me at events, or hear that I was combat wounded, and they look at me, and I don’t... 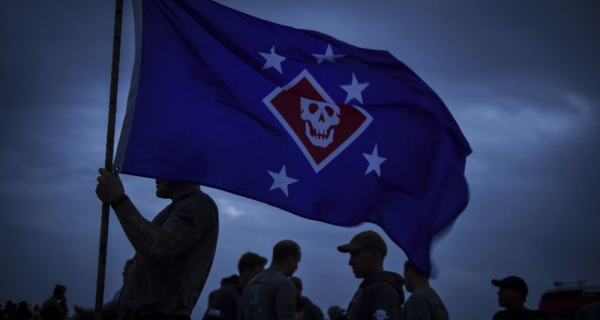 “People see me at events, or hear that I was combat wounded, and they look at me, and I don’t look hurt,” says John Stanz, a 36-year-old with voluminous mutton chops and a goatee that partially covers his easy smile. “That’s why I have this.”

Stanz, who was medically discharged from the Marine Corps in 2012, gets his phone out and pulls up an album from his 2009 deployment to Afghanistan with Fox Company, 2nd Raider Battalion. It starts with a “combat selfie,” the type of photo Stanz jokes that he used to use to “impress girls” before he was engaged.

After the downrange glamour shots, there’s a photo of a slimmed-down HUMVEE variant, then a close-up of the position in the truck he’d man while on patrol, then another shot showing the vehicle in a burning heap.

John Stanz was injured Aug. 16, 2009, after an improvised explosive device detonated under his vehicle in Herat, Afghanistan.

“That’s where they found my body,” Stanz says, pointing to a spot in the photo 70 feet from the flaming remains of the vehicle. The date was Aug. 16, 2009, and the fire came from an improvised explosive device strike in Herat, Afghanistan, that left Stanz in a coma with a traumatic brain injury and a slew of broken bones.

“The bomb went off right under our truck, and it threw me so far I tried to get them to give me the Distinguished Flying Cross for it,” Stanz says. (They didn’t.)

The photos continue: a hospital room; Stanz in bandages on a gurney, a breathing tube in his mouth. Then more photos of him during his months-long recovery, when his family was told he’d likely never wake. “Even if I were lucky enough to wake up,” he says, “I’d never walk and talk again, and even if I could eat on my own, it’d be an absolute miracle.”

Even if I were lucky enough to wake up,” John Stanz told Task & Purpose, “I’d never walk and talk again, and even if I could eat on my own, it’d be an absolute miracle.”

The photos finished, Stanz excuses himself, rises, and heads to the open bar for another drink.

This is how a Marine Raider reunion rolls.

Stanz was one of 30 veterans of the Marine Special Operations Command’s Raider Regiment who came out for this year’s annual Marine Raider Association reunion — a weekend of July festivities for veterans old and new. Marine Raiders of World War II were joined by veterans of the Global War on Terror, a melding of two generations of Americans that couldn’t be more different, according to conventional wisdom: the greatest generation, who loom larger than life in America’s memory, and “entitled” Millennials, who in fact have voluntarily shouldered America’s longest period of sustained combat. Though the theaters, weapons, and circumstances change, Marine Raiders’ experiences in combat — as elites in a service that’s long been considered elite itself — are remarkably similar.

“They are volunteer members of an organization that has literally never existed in a time of peace,” Lt. Col. Russell Worth Parker, a Marine Raider Association board member, told Task & Purpose. “Any Marine who chose to become a Raider did so knowing — maybe hoping — that there was a better than average chance he was going to combat. There’s a price to be paid for that.”

The Marine Raiders of World War II are often credited with being America’s first special operations force. Formed in 1942, in the aftermath of Pearl Harbor and with the Pacific campaign looming ahead, Raiders engaged in both conventional and unconventional warfare, often fighting far behind enemy lines, where they were outnumbered. The Raiders were disbanded in 1944, though their actions during the Pacific Campaign— which included seven Medal of Honor awards, 141 Navy Crosses, 330 Silver Stars, and a string of hard-won battles — ensured the unit was enshrined in Marine Corps lore.

It took another time of crisis for the legendary units to be revived: In the mid-2000s, then-Defense Secretary Donald Rumsfeld called on the Marine Corps to establish its own SOF unit to meet a growing need for operators in the fast-expanding Global War on Terror. Though Reconnaissance and Force Reconnaissance Marine units of the post-World War II years are widely considered to be the spiritual inheritors of the Raiders’ legacy, it wasn’t until the Marine Special Operations Battalions were renamed in 2014 that Marine Raiders officially returned to the Corps.

“The Raiders had a gap in their existence, a substantial gap,” Worth said. “When the Marine Corps chose to relight the flame and formally grant us the title, you really have to connect the guys who started it, with the guys who are going to carry it forward for the next 70 years.”

Both groups have risked and lost more than they can remember, but they gather at events like this to recall what’s been gained.

Commandant of the Marine Corps Gen. Robert B. Neller speaks with Charles H. Meacham, one of the World War II Raiders at this year's Marine Raider Association reunion on July 14 in Arlington, Virginia.

“There’s a common understanding of what are completely uncommon and abnormal experiences,” Worth, a Raider who joined MARSOC early on and has been with Special Operations Command ever since, told T&P.; “You need the ability to reach out to people with similar experiences and understanding that don’t look at you like you have two heads when you talk about some of the experiences that come with war.

“Some of those things are not something you want to tell your family, but you can talk about it with guys who were there or somewhere similar,” he added. “I can sit down with a 98-year-old Raider or a 28-year-old Raider and there is an understanding and mutual respect.”

But these get-togethers may not last. Like other military and veterans groups that reached their heyday following World War II, the oldest members of the Marine Raider Association are in their nineties now, and each year, there are fewer at the reunion. It will fall to younger Raiders to keep their traditions alive.

“When I came in, we were just ‘MARSOC,’” Prime Hall, who served in the outfit from 2009 to 2017, told Task & Purpose. “The Raider patches that we had, they were like an underground thing. We were trying to follow the Raider culture — we kept the patches on us, but weren’t allowed to wear them until we went through school, a deployment, and combat.”

The idea of flying out to a reunion, with its presentations and ceremonies, may feel quaint — especially for a younger generation of Marines who remain connected with their peers through a mix of social media and grassroots outreach. Hall and some former teammates run their own Raider-centric event, the Marine Raider Challenge, with a different feel than the scheduled “mandatory fun” that marks most military gatherings.

But the Raider reunion “was a game changer,” Hall said. “Our time with these guys is limited, but it’s also a gift we didn’t have a few years ago.”

During the reunion, the attendees visited visited Raider Hall on Marine Corps Base Quantico in Virginia, where they saw a close-quarters combat demonstration by Marine martial arts instructors.

“They’re an impressive bunch. The stuff they were doing, throwing each other around like that, just beautiful,” Jack B. Shaffer, one of the World War II Raiders at this year’s reunion, told Task & Purpose. “Not like us, they taught us some things, sure, but what these guys are doing now — the training they have — it’s just incredible.”

The four-day reunion was a mix of moments like this. Young and old, combat veterans and war-wounded, retirees and active duty Raiders reflecting on how things have changed, and how they’ve stayed the same. Like OJT, because that never seems to go away.

“I had been Jimmy Roosevelt’s bodyguard and driver,” explained Shaffer. When Roosevelt, the president’s oldest son, became XO of the 2nd Raider Battalion under legendary founder Evans Carlson, “I was foolish enough to stick around,” said Shaffer, who served as a Raider in the Pacific between 1942 and 1944 before later taking a commission and becoming a Marine aviator.

“They came down to motor-transport and they said, ‘We want somebody to take a machinegun,’ and I said ‘I’ll do it,’ so they issued me a .30-cal machine gun,” Shaffer explained. “And that’s how you got to be a machine-gunner back then: on the job training.”

“There was a great deal of difference” between then and now, Shaffer said. “We were under extreme duress. You gotta realize, we were sitting out on the Pacific coast, which was lost. The war started out with a minus — we were way in the hole. We didn’t know what the heck was going on.”

To prove Shaffer’s point — or just to underscore the fact that even Raiders can’t escape PowerPoint — there’s a slideshow in the background with text that lists off the five SOF truths, one of which cautions that “competent Special Operations Forces cannot be created after emergencies occur.”

The differences between old and new Raiders, however, melted at the reunion.

It’s not just a courage-under-fire commonality, though; it’s a cultural connection that goes far deeper, even down to dark humor.

“Some of the jokes I’ll say, normal civilians are just appalled, and I was even telling them around regular infantry Marines or other Marines, and the response is like ‘Well, that’s weird,’ Stanz said.

“And I’ll say it around the Marine Raiders,” he added, “and they get it immediately.”