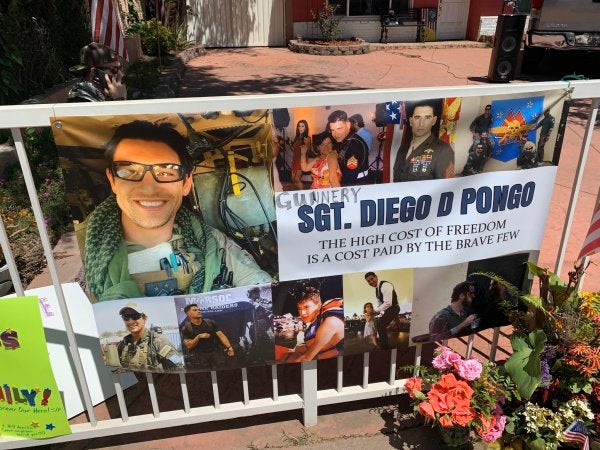 It was a bright, sunny morning in Simi Valley, California on Sunday when a Los Angeles police helicopter flew over a flag-draped home on Katherine Road.

Though some of the people inside didn’t know it yet, the flyover was the start of an hours-long surprise parade featuring thousands of vehicles and well-wishers in honor of the fallen Marine whose family lives there.

Gunnery Sgt. Diego D. Pongo, 34, was killed March 8 along with Capt. Moises A. Navas, 34, while the two battled ISIS fighters in a cave complex in Iraq.

Since enlisting in the Marines in 2004, Pongo had served as a rifleman, a scout sniper and a sniper team leader before becoming a Marine Raider in 2011. Pongo and Navas were both assigned to the 2nd Marine Raider Battalion.

“Both men epitomize what it means to be a Marine Raider,” Col. John Lynch, commanding officer of the Marine Raider regiment, said in a statement in March. “They were intelligent, courageous, and loyal. They were dedicated leaders, true professionals in their craft, and willing to go above and beyond for the mission and their team.”

Nearly two months later, the city of Simi Valley went above and beyond to recognize Pongo’s sacrifice.

After the initial flyover by the LAPD helicopter at 10 a.m., the ground parade officially kicked off with 50 first responder vehicles, including fire engines, police cruisers, ambulances and armored SWAT trucks, the Ventura County Star reported on Sunday.

The first responders were followed by an estimated 1,500 private vehicles waving flags, honking horns, and playing patriotic music. Supporters also walked past the house, albeit while social distancing to prevent the spread of novel coronavirus (COVID-19).

“It was a great show of support in our community,” Simi Valley Police Sgt. Patrick Zayicek told the Ventura County Star

The parade was organized by Pongo’s sister Andrea after his family was forced to delay memorial services for the fallen Marine due to the state's COVID-19-related restrictions on large social gatherings, she explained on social media.

The Sunday parade was meant as a surprise for Pongo’s parents and brothers.

The house itself was decorated with flags and photos of Pongo, who Col. Lynch had described in March as having a “dynamic personality.”

The Raider “brought his mom to this past year’s Marine Corps Birthday Ball ceremony and together they out-danced the rest of us on the dance floor,” Lynch said. “He also loved going on adventures with his daughter, hiking, camping, and woodworking.”