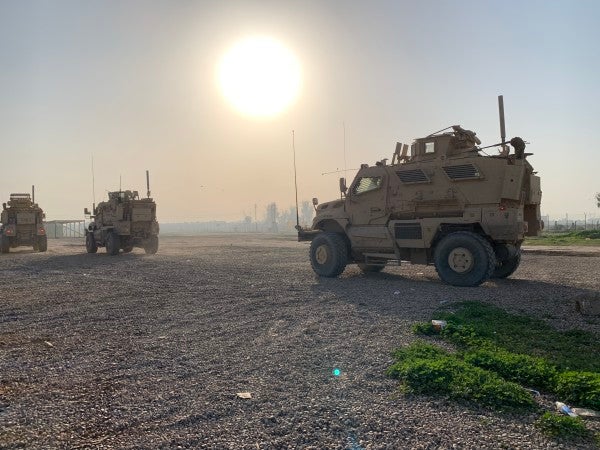 A salvo of about 18 small rockets struck Camp Taji in Iraq late Wednesday night, killing at least two Americans and one coalition member, a U.S. official told The Washington Post.

The attack wounded at least 12 other people, according to the official, Navy Capt. Bill Urban. Five of the wounded were evacuated in serious condition he said.

The U.S. military command in charge of operations in Iraq confirmed that three coalition personnel had been killed in the rocket attack on Camp Taji, but it did not specify the nationalities of those killed.

“The attack is under investigation by the Coalition and Iraqi Security Forces,” the statement says. “Camp Taji is an Iraqi base that hosts Coalition personnel for training and advising missions.”

According to Agence France-Presse, the fatalities included one U.S. soldier, one U.S. contractor, and one British soldier.

Camp Taji is located 17 miles north of Baghdad. The base was hosting Coalition troops at the time of the attack, according to Army Col. Myles Caggins, the top U.S. military spokesman in Iraq.

A U.S. official told Reuters that it was still too early to assign blame for the attack, but any indication that Iran-backed militia were responsible could spark increased military escalation between the U.S. and Iran.

In January, Air Force Maj. Gen. Alex Grynkewich, the deputy commander for operations and intelligence for U.S. troops in Iraq and Syria, said most attacks on U.S. and allied forces in Iraq are being carried out by Shiite militias.

There are more than 100 Shiite militia groups in Iraq, some of which take their orders from Iran, he said.