"Let me be clear — the United States will not tolerate attacks against our people, our interests, or our allies." 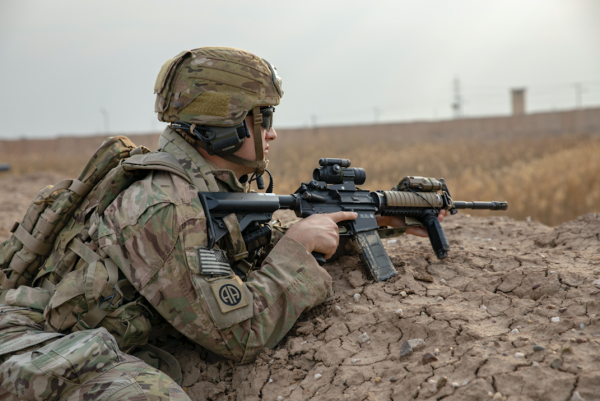 Defense Secretary Mark Esper says that all options are on the table in response to a rocket attack on an Iraq military base on Wednesday.

“Let me be clear,” Esper told reporters on Thursday. “The United States will not tolerate attacks against our people, our interests, or our allies. All options are on the table as we work with our partners to bring the perpetrators to justice and maintain deterrence.”

The attack against Camp Taji, Iraq killed two Americans and a British service member, and wounded 14 others. Gen. Mark Milley, Chairman of the Joint Chiefs, said on Thursday that the injured troops included American, British, and Polish troops, as well as contractors. He added that he would expect some traumatic brain injuries among troops, but that it is too early to tell.

There were a total of 30 rockets fired, with 12 to 18 actually making contact with Camp Taji, Milley said. There was also some structural damage to facilities on the base.

Both Esper and Milley identified an Iranian-backed Shia militia group as being behind the attack, but declined to go into specifics. Esper added that “we do know they were backed by Iran. We know that much for sure.”

Meanwhile, President Donald Trump told reporters at the White House on Thursday that it “hasn't been fully determined it was Iran.

“It was a rebel group but most likely looked like it could be backed by Iran,” he said. “We'll see what the response is.”

At the Pentagon, Esper maintained that they would “hold the perpetrators accountable.

“You don't get to shoot at our bases, and kill and wound Americans, and get away with it.”