Inside Soleimani’s plot to attack US forces in Iraq

(Reuters) – In mid-October, Iranian Major-General Qasem Soleimani met with his Iraqi Shi'ite militia allies at a villa on the... 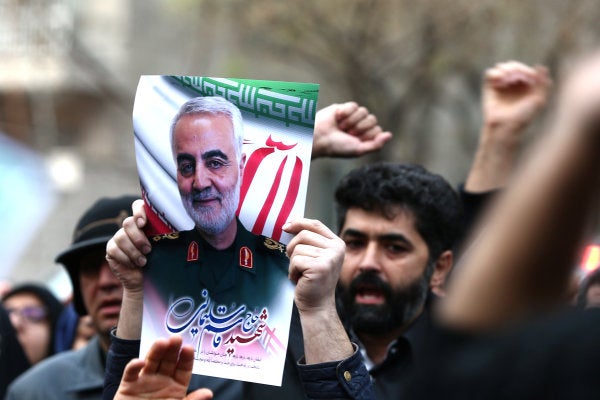 (Reuters) – In mid-October, Iranian Major-General Qasem Soleimani met with his Iraqi Shi'ite militia allies at a villa on the banks of the Tigris River, looking across at the U.S. embassy complex in Baghdad.

The strategy session, which has not been previously reported, came as mass protests against Iran's growing influence in Iraq were gaining momentum, putting the Islamic Republic in an unwelcome spotlight. Soleimani's plans to attack U.S. forces aimed to provoke a military response that would redirect that rising anger toward the United States, according to the sources briefed on the gathering, Iraqi Shi'ite politicians and government officials close to Iraqi Prime Minister Adel Abdul Mahdi.

Soleimani's efforts ended up provoking the U.S. attack on Friday that killed him and Muhandis, marking a major escalation of tensions between the United States and Iran. The two men died in air strikes on their convoy at a Baghdad airport as they headed to the capital, dealing a major blow to the Islamic Republic and the Iraqi paramilitary groups it supports.

Interviews with the Iraqi security sources and Shi'ite militia commanders offer a rare glimpse of how Soleimani operated in Iraq, which he once told a Reuters reporter he knew like the back of his hand.

Two weeks before the October meeting, Soleimani ordered Iranian Revolutionary Guards to move more sophisticated weapons – such as Katyusha rockets and shoulder-fired missiles that could bring down helicopters – to Iraq through two border crossings, the militia commanders and Iraqi security sources told Reuters.

At the Baghdad villa, Soleimani told the assembled commanders to form a new militia group of low-profile paramilitaries – unknown to the United States – who could carry out rocket attacks on Americans housed at Iraqi military bases. He ordered Kataib Hezbollah – a force founded by Muhandis and trained in Iran – to direct the new plan, said the militia sources briefed on the meetings.

Soleimani told them such a group “would be difficult to detect by the Americans,” one of the militia sources told Reuters.

Before the attacks, the U.S. intelligence community had reason to believe that Soleimani was involved in “late stage” planning to strike Americans in multiple countries, including Iraq, Syria and Lebanon, U.S. officials told Reuters Friday on condition of anonymity. One senior U.S. official said Soleimani had supplied advanced weaponry to Kataib Hezbollah.

White House national security adviser Robert O'Brien told reporters on Friday that Soleimani had just come from Damascus, “where he was planning attacks on American soldiers, airmen, Marines, sailors and against our diplomats.”

An official at the headquarters of Iran's Revolutionary Guards declined to comment. A spokesperson for the Iranian foreign ministry was not available for comment.

The United States has grown increasingly concerned about Iran's influence over the ruling elite in Iraq, which has been beset for months by protesters who accuse the government of enriching itself and serving the interests of foreign powers, especially Iran, as Iraqis languish in poverty without jobs or basic services.

Soleimani, leader of the Revolutionary Guards' Quds Force, was instrumental in expanding Iran's military influence in the Middle East as the operative who handles clandestine operations outside Iran. The 62-year-old general was regarded as the second-most powerful figure in Iran after Supreme Leader Ayatollah Ali Khamenei.

Muhandis, like Soleimani, had long been on the radar of the United States, which had declared Muhandis a terrorist. In 2007, a Kuwaiti court sentenced him to death in absentia for his involvement in the 1983 U.S. and French embassy bombings in Kuwait.

Soleimani picked Kataib Hezbollah to lead the attacks on U.S. forces in the region because it had the capability to use drones to scout targets for Katyusha rocket attacks, one of the militia commanders told Reuters. Among the weapons that Soleimani's forces supplied to its Iraqi militia allies last fall was a drone Iran had developed that could elude radar systems, the militia commanders said.

Kataib Hezbollah used the drones to gather aerial footage of locations where U.S. troops were deployed, according to two Iraqi security officials who monitor the movements of militias.

On December 11, a senior U.S. military official said attacks by Iranian-backed groups on bases hosting U.S. forces in Iraq were increasing and becoming more sophisticated, pushing all sides closer to an uncontrollable escalation.

On Dec. 27 more than 30 rockets were fired at an Iraqi military base near the northern Iraq city of Kirkuk. The attack killed a U.S. civilian contractor and wounded four American and two Iraq servicemen.

Washington accused Kataib Hezbollah of carrying out the attack, an allegation it denied. The United States then launched air strikes two days later against the militia, killing at least 25 militia fighters and wounding 55.

The attacks sparked two days of violent protests by supporters of Iranian-backed Iraqi paramilitary groups who stormed the U.S. Embassy's perimeter and hurled rocks, prompting Washington to dispatch extra troops to the region and threaten reprisals against Tehran.

On Thursday – the day before the attack that killed Soleimani – U.S. Defense Secretary Mark Esper warned that the United States might have to take preemptive action to protect American lives from expected attacks by Iran-backed militias.

“The game has changed,” he said.