"We remain ready to return our full attention and efforts back to our shared goal of ensuring the lasting defeat of Daesh." 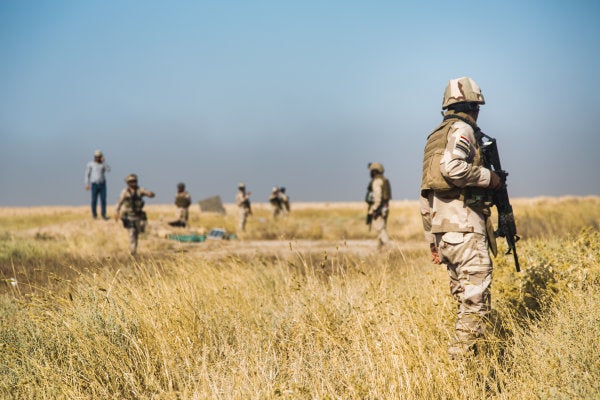 The U.S.-led anti-ISIS coalition in Iraq and Syria is pausing training of Iraqi forces to focus on the security of Iraqi bases that are hosting American troops.

“Repeated rocket attacks over the last two months by elements of Kata'ib Hezbollah have caused the death of Iraqi Security Forces personnel and a U.S. civilian. As a result we are now fully committed to protecting the Iraqi bases that host Coalition troops,” A statement from Combined Joint Task Force-Operation Inherent Resolve said. “This has limited our capacity to conduct training with partners and to support their operations against Daesh and we have therefore paused these activities, subject to continuous review.”

According to Military Times, U.S. officials report there have been 13 attacks on bases housing American troops. Sunday's announcement comes a day after NATO said it, too was suspending a training mission for Iraqi troops over security concerns in the wake of the killing of Iran's Maj. Gen. Qasem Soleimani.

NATO spokesman Dylan White said in a statement that while NATO's mission is still ongoing, “training activities are temporarily suspended,” per Reuters.

The CJTF-OIR release says the coalitions remains “resolute as partners of the Government of Iraq and the Iraqi people … We remain ready to return our full attention and efforts back to our shared goal of ensuring the lasting defeat of Daesh.”