The extra Marines are being sent to protect the embassy, not evacuate it. 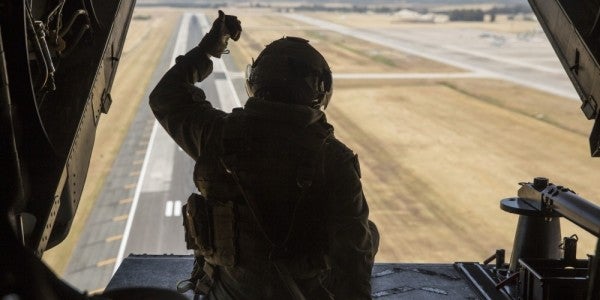 The extra Marines are coming from a Special Purpose Marine Air-Ground Task Force based in the region, officials told Task & Purpose on condition of anonymity. Their mission will be to protect the embassy, not evacuate it.

Protesters and Iranian-backed militia fighters attempted to storm the heavily fortified embassy on Tuesday in retaliation for recent U.S. airstrikes on Kata'ib Hezbollah, an Iranian proxy force. Those airstrikes came after a rocket attack on a U.S. military base at Kirkuk that killed an American contractor and wounded several service members.

During the assault on the embassy, Army Apache helicopters flew a show of force mission, during which they dropped flares, a U.S. official told Task & Purpose.

VIDEO: AH-64 Apaches protect @USEmbBaghdad. ?“We have taken appropriate force protection actions to ensure the safety of American citizens…and to ensure our right of self-defense. We are sending additional forces to support our personnel at the Embassy.”~@EsperDoD ???? pic.twitter.com/amABHBAOcL

Fox News reporter Lucas Tomlinson first tweeted on Tuesday that about 100 extra Marines would be dispatched to the embassy.

Defense Secretary Mark Esper also issued a statement saying that more troops would reinforce the embassy, but he did not say exactly how many.

“We are sending additional forces to support our personnel at the embassy,” he continued. “As in all countries, we rely on host nation forces to assist in the protection of our personnel in country, and we call on the Government of Iraq to fulfill its international responsibilities to do so. The United States continues to support the Iraqi people and a free, sovereign, and prosperous Iraq.”