"This is the latest of many provocative and hostile actions by Iran against vessels operating in international waters," President Donald Trump said on Thursday 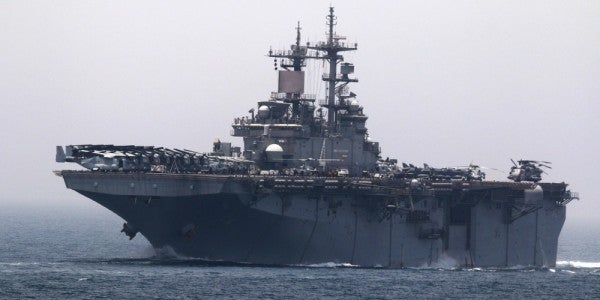 “The Boxer took defensive action against an Iranian drone which had closed into a very, very near distance – approximately 1,000 yards – ignoring multiple calls to stand down and was threatening the safety of the ship and the ship's crew,” Trump said during a White House ceremony. “The drone was immediately destroyed.”

“This is the latest of many provocative and hostile actions by Iran against vessels operating in international waters,” he continued. “The United States reserves the right to defend our personnel, our facilities, our interests and calls upon all nations to condemn Iran's attempts to disrupt freedom of navigation and global commerce. I also call on other nations to protect their ships as they go through the Strait and to work with us in the future.”

A Pentagon spokesman issued a brief statement on Thursday saying a “fixed wing unmanned aerial system” flew dangerously close to the Boxer around 10 a.m. local time while she ship was in international waters transiting the Strait of Hormuz.

“The ship took defensive action against the UAS to ensure the safety of the ship and its crew,” said spokesman Jonathan Hoffman.

Roughly 4,500 Marines and sailors with the 11th Marine Expeditionary Group is embarked aboard the Boxer and the two other ships in its amphibious ready group: the San Antonio-class amphibious transport dock USS John P. Murtha and the landing ship dock USS Harpers Ferry, according to Reuters.

Thursday's incident comes nearly a month after the Iranians shot down a Navy RQ-4 Global Hawk drone over the Strait of Hormuz. The U.S. government claims the $110 million drone was in international airspace when it was attacked.

Prior to that, Houthi rebels in Yemen shot down an MQ-9 Reaper on June 6 with Iranian help, according to U.S. Central Command. The Iranians fired a missile at another Reaper over the Gulf of Oman a week later, but the drone was not hit.

Tensions between the United States and Iran have been building since May, when National Security Advisor Ambassador John Bolton announced the aircraft carrier USS Abraham Lincoln and bombers were being rushed to the Middle East.

Marine Gen. Kenneth McKenzie Jr., head of CENTCOM, had asked for reinforcements in response to indications that Iran and its proxy forces were preparing to attack U.S. troops in the region, such as intelligence that Iranian Revolutionary Guards were loading missiles onto dhows.

The U.S. government has accused Iran of being responsible for sabotage of foreign tankers and a rocket attack on the U.S. embassy on Baghdad. Iran's Revolutionary Guards announced on Thursday that they recently seized a foreign tanker in the Persian Gulf, which they claim was trying to smuggle oil.

WATCH NEXT: Once Political Foes, These Vets Groups Are Teaming Up To End The 'Forever Wars'