No, the Pentagon’s ‘new’ aircraft carrier and bomber deployment is not a sign of imminent war with Iran

Everyone just needs to calm down. 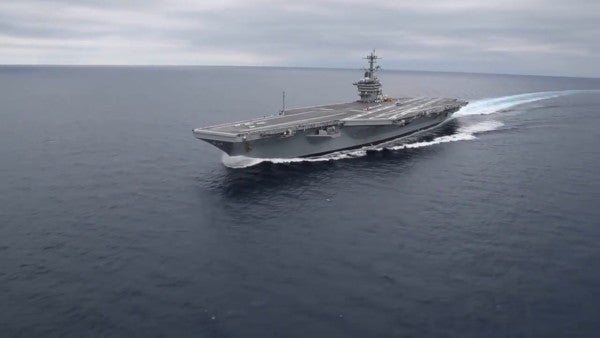 If you are worried that the deployment of the aircraft carrier USS Abraham Lincoln and a cadre of bombers to the U.S. Central Command theater is a major military escalation that could spark a war with Iran, take several deep, cleansing breaths.

The strike group originally left Norfolk, Virginia, in April as part of a regularly scheduled deployment, during which the Lincoln will literally sail around the world to arrive at its new homeport in San Diego — and while the carrier had been scheduled to transit the CENTCOM area of responsibility, its arrival there has simply been accelerated “in order to defend American forces and interests in the region,” a defense official told Task & Purpose on Monday.

The reality of the Lincoln's deployment appears to run counter to the urgency emanating from the White House. National Security Advisor John Bolton first announced on Sunday that the United States is sending the aircraft carrier and bombers to the region amid “troubling and escalatory indications and warnings” from Iran.

“The United States is deploying the USS Abraham Lincoln Carrier Strike Group and a bomber task force to the U.S. Central Command region to send a clear and unmistakable message to the Iranian regime that any attack on United States interests or on those of our allies will be met with unrelenting force,” Bolton said in a statement. “The United States is not seeking war with the Iranian regime, but we are fully prepared to respond to any attack, whether by proxy, the Islamic Revolutionary Guard Corps, or regular Iranian forces.”

On Tuesday, Acting Defense Secretary Patrick Shanahan echoed Bolton's statement, tweeting that he approved the carrier strike group and bomber task force deployments because they are “a prudent repositioning of assets in response to indications of a credible threat by Iranian regime forces.”

It's worth noting that neither Bolton nor Shanahan detailed what provocative acts Iran has taken, although the Iranian regime recently declared that all U.S. military personnel serving in the Middle East are terrorists in retaliation for President Donald Trump designating Iran's elite Revolutionary Guards as a terrorist organization.

Either way, it's likely not as urgent as it seems: As of Saturday, the Lincoln and its strike group were conducting operations in the Ionian Sea off Italy, according to a Defense Department news release. That means the ships have to transit the Suez Canal, the Red Sea, and the Gulf of Aden before getting even close to Iran, as NPR national security editor Phil Ewing noted:

Had QMC work up this highly technical chart plotting the voyage. pic.twitter.com/5rl66Q9e1F

Regardless of the justification, Chief of Naval Operations Adm. John Richardson briefly caused a stir on Monday at the Navy League's annual Sea-Air-Space symposium when he stated the Lincoln strike group had “planned to deploy for some time now,” leading to some questions about whether he was contradicting Bolton.

Richardson clarified his comments by tweeting the carrier strike group has been on a regularly scheduled deployment since April 1 and it is headed to the CENTCOM region at the request of Bolton and Shanahan.

When a reporter tweeted at him asking if the strike group had planned to sail through the CENTCOM region before Bolton and Shanahan's request, Richardson replied: “You know I never talk about future operations but what I can say is that due to our dynamic nature, the #Navy can quickly and efficiently move to meet national tasking.”

You know I never talk about future operations but what I can say is that due to our dynamic nature, the #Navy can quickly and efficiently move to meet national tasking

As for the bombers headed downrange, a spokeswoman for U.S. Air Forces Central Command declined to say which task force is being deployed to deter Iran.

“We do not discuss movement of specific platforms publicly, however, the U.S. Air Force aircraft routinely rotate in and out of theater to fulfill operational requirements,” said Maj. Holly Brauer. “United States Central Command will continue to maintain the right mix of aircraft in support of ongoing operations to maintain air superiority and protect forces on the ground.”

The Air Force did not rotate a new bomber squadron to the CENTCOM theater when B-1B Lancers returned to Dyess Air Force Base, Texas, in late March after a yearlong deployment, a defense official said. Rather than having a continuous presence of bombers in the Middle East and Southwest Asia, the Air Force will be more unpredictable in its bomber deployments going forward.

SEE ALSO: War Watch Day 5: Reports Of A US 'Armada' Steaming Towards Syria Are Total BS

WATCH NEXT: Gen. Petraeus On Shia Militants And Iran