The Air Force refused to bomb the porta-potty because notion that it posed a threat was "ludicrous," a defense official told Foreign Policy. 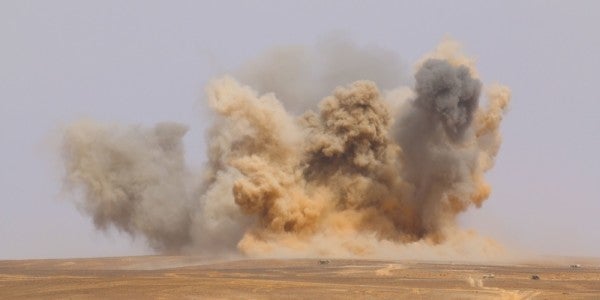 War with Iran was narrowly averted in May 2017 when the Air Force refused to bomb a truck carrying a porta-potty that was headed toward Iranian-backed forces in Syria.

Foreign Policy's Lara Seligman has the scoop about when the s**t came close to hitting the fan after the U.S.-led coalition in Syria ordered the toilet to be annihilated.

The incident happened near a U.S. military outpost in al-Tanf, Syria, where pro-regime forces believed to be affiliated with Iran or Hezbollah established their own base, according to Foreign Policy, which cited an unnamed defense official. The U.S-led coalition bombed the site and then told the Russians that the coalition would use military force to prevent the pro-regime forces from moving closer to al-Tanf or bringing in supplies.

On May 19, 2017, U.S. forces ordered an airstrike on a truck that was bringing a porta-potty to the pro-regime outpost, but the Air Force refused because it did not believe the strike was a lawful order and the notion that the porta-potty posed a threat was “ludicrous,” the defense official told Foreign Policy.

A spokesman for U.S. Central Command refused to comment on the matter when contacted by Task & Purpose. No further information about the great crapper caper was immediately available on Monday.

SEE ALSO: No, US And Russian Troops Are Not Shooting At Each Other In Syria, US Official Clarifies

WATCH NEXT: Russian Mercenaries Describe Their Defeat In Syria