What withdrawal? Hundreds of US troops to remain in Syria

U.S. troops will remain along Syria's border with Turkey and at the al-Tanf garrison 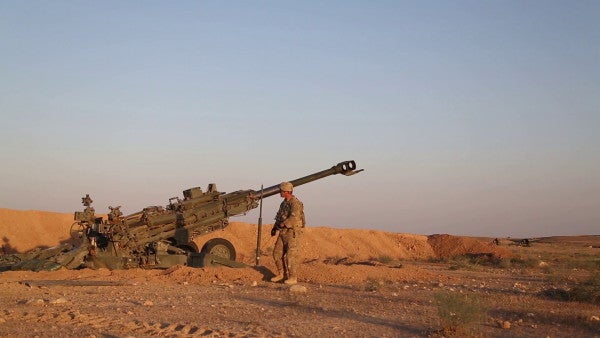 Several hundred U.S. troops will remain in Syria after allied forces clear ISIS fighters out of their last stronghold in the country, officials said on Friday.

President Donald Trump announced in December that he would withdraw all U.S. troops from Syria, but Sen. Lindsey Graham has since made a strong push to keep a small residual force along the Turkish border along with troops from European allies.

The latest plan calls for a couple hundred U.S. troops to remain in northeastern Syria to create a “safe zone” along the border with Turkey, officials said. The troops will not be “peacekeepers,” as previously reported.

“Are they going to be combat ready? Yes. But they're going to be observing and monitoring,” a senior official told Task & Purpose.

Another few hundred U.S. troops will remain at the al-Tanf garrison, where they will continue with their current mission, officials said. The U.S. base is strategically located along a potential supply route through which Iran could send forces from Iraq to Syria. In May 2017, U.S. and Iranian-backed forces nearly got into a shooting match over a porta-potty.

So far, there has been no official announcement for how many U.S. troops could repain in Syria. Acting Defense Secretary Patrick Shanahan told reporters the Pentagon “doesn't talk troop numbers or troop movements.”

On Thursday, Shanahan met with Belgian Defense Minister Didier Reynders, who indicated that European allies could potentially contribute troops to the observer force in Syria.

“I think we saw some good progress yesterday and today's meeting really is about talking next steps,” Shanahan said on Friday.

Marine Gen. Joseph Dunford, chairman of the Joint Chiefs of Staff, added that he is confident that European allies will join the observer mission in Syria.

Former Defense Secretary James Mattis resigned over Trump's plan to pull U.S. troops from Syria. Turkey considers the Syrian Democratic Forces, which include Kurdish fighters, to be terrorists. Mattis reportedly became infuriated when he learned that Turkish Defense Minister Hulusi Akar vowed that America's Kurdish allies would be “buried in ditches when the time comes.”

On Friday, Akar told reporters during a meeting with Shanahan that Turkey's quarrel is strictly with Kurdish terrorist groups, such as the YPG.

“We have never, ever have any problems with the Kurds or any other entities in Turkey or outside Turkey in Syria,” Akar said. “We are fighting against terrorist organizations.”

UPDATE: This story was updated on Feb. 22 with comments about the “safe zone” along Syria's border with Turkey.