"I always think of Sen. Graham as an ally and we have shared interests. He is a problem-solver and I am very confident we will come together with solutions for Syria." 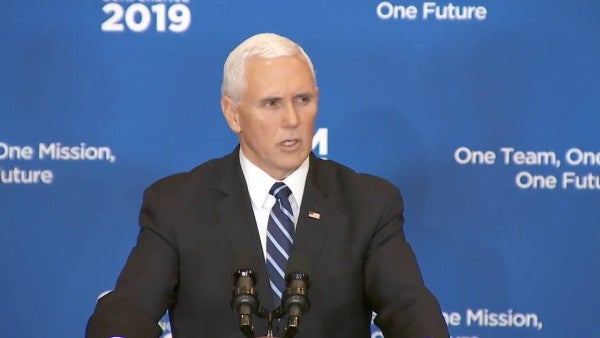 There is a great disturbance in the Force. Acting Defense Secretary Patrick Shanahan's relationship with Congress is going through a rough patch and your humble correspondent has neither the wisdom nor the clairvoyance to see how all of this gets resolved.

Being in the Pentagon now feels a lot like the unsettling aftermath of listening to your parents fight as a kid. After the yelling comes that awful silence, broken only by the BOOM! of slammed doors.

While the building is normally tense because of the president's combustible temper and tendency to announce policy changes on Twitter, things took a sharp turn up S**t Creek on Feb. 20 when Breitbart's Kristina Wong and the Washington Post's Josh Rogin simultaneously reported that Sen. Lindsey Graham (R-S.C.) had exploded at the acting defense secretary during a meeting in Munich.

Graham, who had been courting European allies to send troops to Syria, was reportedly furious when Shanahan told him that the U.S. military intended to withdraw all troops from the country by April 30.

The senator called the troop withdrawal timeline “the dumbest f******g idea I've ever heard” and declared he was Shanahan's “adversary” on Syria, according to media reports. Graham's spokesman Kevin Bishop did not dispute the accuracy of the senator's reported comments when contacted by Task & Purpose.

Keep in mind that Shanahan's predecessor, former Defense Secretary James Mattis resigned in protest over the president's intent to withdraw all U.S. troops from Syria. Trump has since taken several parting shots at Mattis, claiming that he actually fired the retired Marine Corps general.

Since it is abundantly clear where Trump stands on Syria and it is even more apparent what happens to cabinet officials who disagree with him, your perplexed Pentagon correspondent cannot explain why Graham would unload on Shanahan for saying he would do what the president told him to do.

Still, other lawmakers at the Munich meeting were also unsatisfied with Shanahan's answers on Syria because they believe withdrawing from the country will endanger the United States and its allies, a Congressional aide told Task & Purpose.

When asked on Feb. 21 about his heated exchange with Graham, Shanahan said he does not consider the senator his adversary.

“I always think of Sen. Graham as an ally and we have shared interests,” Shanahan said at the start of a meeting with his Belgian counterpart. “He is a problem-solver and I am very confident we will come together with solutions for Syria.”

Shanahan and the Belgian defense minister also disputed reporting that European allies have rejected a plan being pushed by Graham to send an observer force to Syria if the U.S. withdraws all of its troops from the country.

The entire dustup appeared to become overtaken by events later when officials said on Feb. 22 that several hundred U.S. troops would remain in Syria to create a “safe zone” along the Turkish border and to continue to man the al-Tanf garrison.

It remains to be seen if Shanahan can placate his critics on Capitol Hill, but as of writing this story, your friendly correspondent sees no indications that he will leave the Pentagon any time soon.

Graham, Keane, Cotton, and Kyl all declined to comment for this story. Wilson's spokeswoman Maj. Sheryll Klinkel said that Wilson remains focused on her current duties.

But without enough support in the Senate to confirm him, Shanahan will likely remain acting defense secretary for the foreseeable future, according to Foreign Policy.

For the time being, the official word from the Pentagon is remain calm. All is well.

“The acting secretary is focused on current operations, alignment across the department, and implementation of the National Defense Strategy,” said Shanahan's spokesman, Army Col. Joseph Buccino.

But life at the Pentagon is like trying to walk on shifting sands. The only thing certain is that nothing is ever certain.

SEE ALSO: After Valentine's Day, it's clear the Pentagon is in love with great power competition

WATCH NEXT: The 30mm Cannon Allows The Stryker To Fight Back Against Peers