The U.S. military’s head spokesman for operations in Iraq and Syria has issued a full apology for accidentally retweeting a... 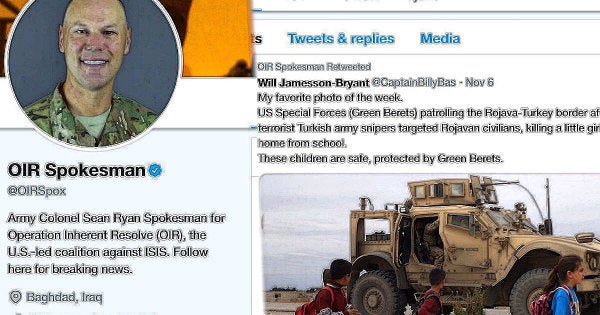 The U.S. military’s head spokesman for operations in Iraq and Syria has issued a full apology for accidentally retweeting a Twitter post that accused Turkish troops of trying to kill civilians in northern Syria.

The tweet showed U.S. troops in an M-ATV next to little children wearing backpacks with the following text: “My favorite photo of the week. US Special Forces (Green Berets) patrolling the Rojava-Turkey border after terrorist Turkish army snipers targeted Rojavan civilians, killing a little girl walking home from school. These children are safe, protected by Green Berets.”

From the official Operation Inherent Resolve account, Army Col. Sean Ryan apologized to Turkey: “In my official capacity, I accidentally shared content that was insulting to our Coalition partner Turkey, a key partner in the mission to defeat ISIS. I meant no disrespect. We have a duty to mutual security, and we are committed to defeating ISIS. Please accept my apology.”

Turkey has helped the U.S. military fight ISIS but is also gravely concerned about Kurds carving out an enclave on its border with Syria. In January, Turkey invaded norther Syrian to drive Kurdish fighters out of the town of Afrin, bringing the Syrian Democratic Forces’ offensive against ISIS to a halt. The two sides have traded fire several times since then.

Ryan's Twitter faux pas comes at a particularly sensitive moment in U.S./Turkish relations. Turkish President Recep Tayyip Erdoğan said on Monday that President Trump has given him permission to make another incursion into Kurdish-held Syria.

Manning had previously said that any new Turkish military operation in northeastern Syria where U.S. troops are working with Syrian Democratic Forces would be “unacceptable.” But on Monday, the Pentagon had a more diplomatic response to Erdoğan's latest comments.

“We have made significant progress recently in the campaign, but the job is not yet done,” he continued.

“President Trump and President Erdogan discussed‎ these issues in their call last week, as did Secretary Pompeo and Foreign Minister Cavusoglu in a separate call. Both our countries remain focused on coordinating to counter the threats that terror poses to Turkey, the region, and beyond. We believe we are making progress with Turkey on these issues.”