ISIS Commander Tries Shooting Combat Propaganda. Then His ‘Brothers’ Leave Him For Dead After He Gets Shot 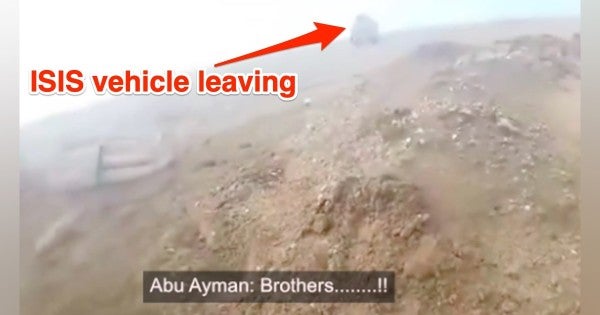 An ISIS commander tried to record helmet-camera footage that probably would've made for a great propaganda video if his unit's attack was successful, but instead, he recorded himself getting smoked as his supposed “brothers” left him behind.

BBC Middle East Correspondent Quentin Sommerville recently posted the video on Twitter after President Donald Trump announced U.S. troops would leave Syria. Although the video is a bit old, the version from Sommerville now has subtitles, and, well, it's rather hilarious to watch.

In the video, which happens from the commander's perspective, you can see him screaming at his own guys to keep attacking, before he eventually tries to get them to go back into a vehicle and get the hell out of there.

“Come on get in the vehicle what's wrong with you?!” he screams to the other fighters. “GET MOUNTED!”

They finally do. And then as he crawls his way over under fire from Syrian Democratic Forces, he gets shot and falls over. But, he's not dead. In his final moments, as his fellow ISIS fighters start to bounce in the vehicle, he can be heard screaming, “Brothers! Brothers!”

Well, they didn't hear him. Which is a good thing, since we all now get to enjoy this ISIS dipshit's propaganda self-own, now and forever.

After President Trump's withdrawal announcement, the SDF have made tremendous progress against Islamic State in Syria. We've added subtitles to this earlier SDF released video of an IS commander's bodycam footage, which gives *some* insight into their failure to hold ground. pic.twitter.com/vDDAJQW2lH

WATCH: This Guy Reportedly Sent His Resume To ISIS