U.S. troops on the ground in Iraq and Syria sent in for the so-called “advise and assist” mission against the... 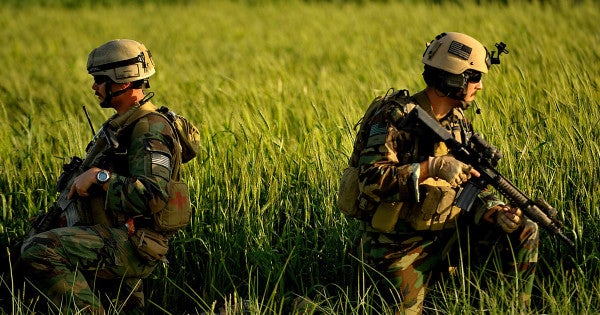 U.S. troops on the ground in Iraq and Syria sent in for the so-called “advise and assist” mission against the Islamic State have engaged in direct combat with the terror group more often than you'd think, according to individual award citations obtained by Code Red News.

“I want the American people to understand how this effort will be different from the wars in Iraq and Afghanistan,” President Barack Obama said in Sep. 2014. “It will not involve American combat troops fighting on foreign soil. This counterterrorism campaign will be waged through a steady, relentless effort to take out ISIL wherever they exist, using our air power and our support for partner forces on the ground.”

As Obama and Pentagon leaders often explained, the battle against ISIS was to be waged by and through regional partners, with U.S. troops staying in the background safely behind the lines, with the exception of occasional special operations raids. But, as the award citations show, the advisory role Americans were engaged in — at least during the spring of 2016 — was plenty dangerous.

In response to a Freedom of Information Act request, Marine Special Operations Command provided me a number of somewhat-redacted citations for service-members who received the Navy and Marine Corps Achievement Award (with combat distinguishing device) for actions during Operation Inherent Resolve.

Three such award citations mentioned similar actions during the period of Jan. 2016 to July 2016. I assume the awards were all given to members of the same unit, but MARSOC declined to confirm this.

Although lower-tier awards such as these are hardly every reported on, they are quite interesting since they tell the story of what Americans were really doing in Iraq and Syria at a time of minimal Pentagon transparency and independent reporting.

So what were grunts on the ground in Iraq doing in the spring of 2016?

We already know they were hitting ISIS with thousands of rounds of artillery. But some Marines were finding themselves even closer to the fight, engaging in small arms battles and tit-for-tat engagements with 81 and 120mm mortars, which boast effective ranges between 3 and 5 miles.

During an operation named Phoenix Storm, for example, as coalition and Peshmerga forces were under sustained “heavy indirect and machine-gun fire,” an unnamed MARSOC Element Member disregarded his own safety and exposed himself to enemy rounds that were impacting within 30 meters of his position, according to one citation. He fired back over 12 fire missions on the 120mm mortar, killing 10 enemy fighters, destroying one enemy mortar position, and neutralizing one tactical vehicle.

Another award for a MARSOC Canine Handler sheds light on the unit's apparent operational tempo: He and his military working dog performed more than 350 counter-IED sweeps in the area over that six-month period — an average of twice a day. Since military working dog teams are most often attached to larger units, this suggests the MARSOC operators (or their Iraqi and Peshmerga partners) were patrolling outside the wire quite often.

The handler also employed indirect fire and unmanned aerial surveillance assets, according to his citation. As an 81mm mortar gunner during one operation, it says, he “fired 6 fire missions while rounds were impacting within 75 meters of his position,” killing three enemy fighters and destroying two mortar positions. Then later as a 120mm mortar gunner, his position received “effective, sustained enemy artillery fire within 30 meters,” but he unhesitatingly conducted multiple fire missions and killed 10 enemy fighters.

Meanwhile, the MARSOC team's Element Leader (typically a staff sergeant), while serving as the subordinate ground force commander, and under “sustained and accurate enemy indirect fire impacting his position,” provided fires in support of the Peshmerga.

During one such operation as the Peshmerga took casualties and were pinned down by enemy fire, the citation says, “he expertly led his team's fire direction center and gun line while employing 81mm and 120mm mortars to destroy enemy positions. These devastating fires reinvigorated the assault and enabled the main effort to seize their objectives.”

What can we learn from such awards? Although it's pretty clear claims that American troops in 2016 were not operating on the “front line” were bunk, at least now we know a little more of what they really faced, and can shed light on their incredible bravery during the period.

View the award citations below: