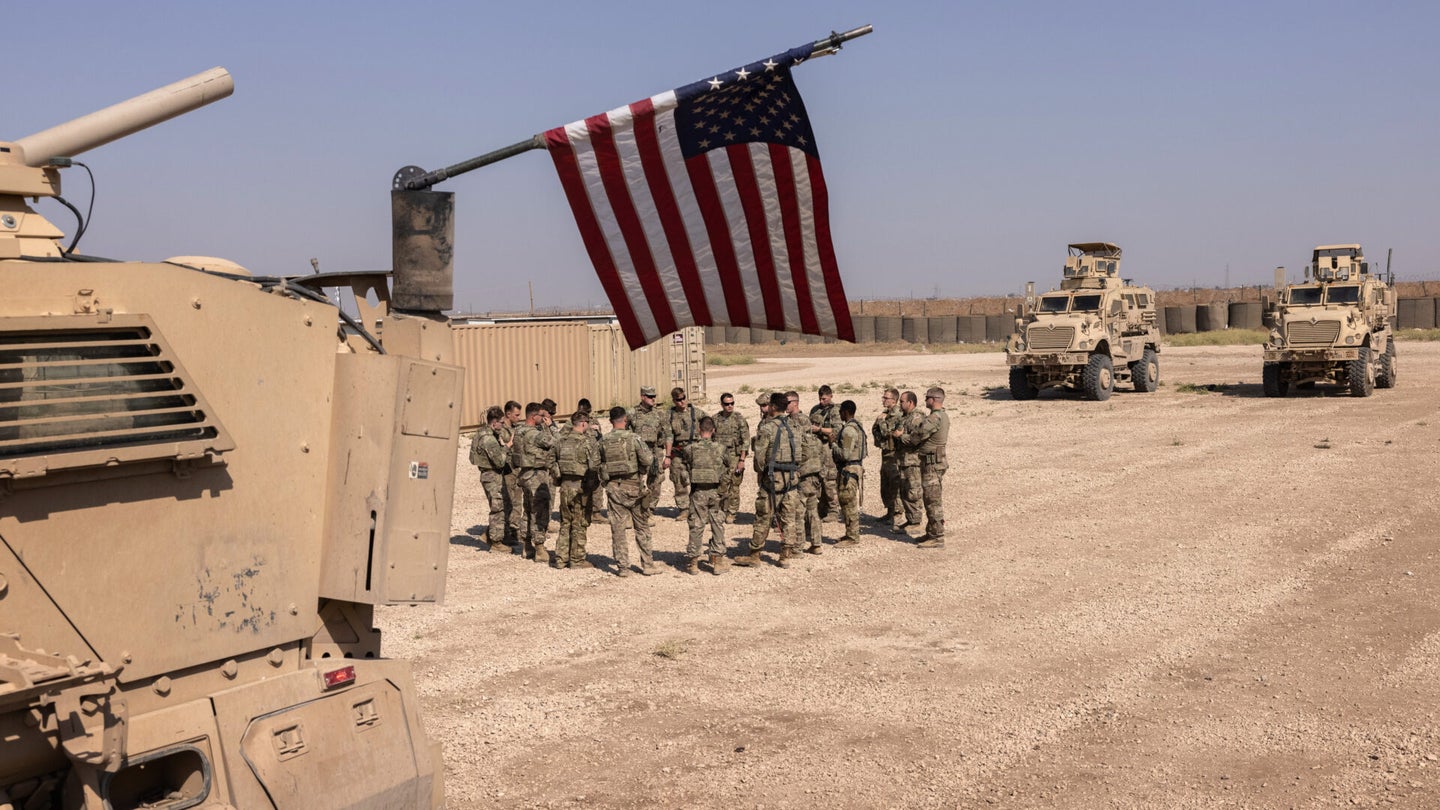 NORTHEASTERN SYRIA - MAY 25: U.S. Army soldiers prepare to go out on patrol from a remote combat outpost on May 25, 2021 in northeastern Syria. U.S. forces, part of Task Force WARCLUB operate from combat outposts in the area, coordinating with the Kurdish-led Syrian Democratic Forces (SDF) in combatting residual ISIS extremists and deterring pro-Iranian militia. (Photo by John Moore/Getty Images).
SHARE

Reports of the Forever War’s demise have been greatly exaggerated.

U.S. troops based at the Al Tanf Garrison in Syria came under a “deliberate and coordinated attack” on Wednesday, said Navy Capt. Bill Urban, a spokesman for U.S. Central Command.

“Based on initial reports, the attack utilized both unmanned aerial systems and indirect fire,” Urban said in a statement.

No injuries to U.S. troops have been reported so far, he said.

“We continue to maintain all appropriate force protection measures to ensure the safety and security of our forces,” Urban said. “We maintain the inherent right of self-defense and will respond at a time and place of our choosing.”

Most Americans may be surprised to learn that the United States still has roughly 900 troops in Syria along with about 2,500 troops in Iraq because President Joe Biden’s administration and its surrogates have tried to paint the fall of Afghanistan to the Taliban as the end of the U.S. military’s myriad of strategically nebulous missions since Sept. 11, 2001.

When Biden spoke at the United Nations in September, he claimed that America had finally entered peacetime.

“I stand here today, for the first time in 20 years, with the United States not at war,” Biden told the 76th Session of the United Nations General Assembly.  “We’ve turned the page.”

Sen. Tim Kaine (D-Va.) has repeatedly pressed the talking point that he is relieved that children are no longer being born into a nation at war.

“Some will challenge my characterization because the world is a dangerous place and American troops are deployed all over the world,” Kaine said during a Sept. 14 Senate Foreign Affairs Committee hearing. “And there’s risks, and there’s threats, but we have been a nation at permanent war for 20 years. We were never supposed to be that nation. Never.”

“President Biden had the courage to say this nation is not a nation that should be permanently at war,” he continued. “It’s going to take a while for people to wrap their head around the notion that though there are serious threats for us everywhere, we’re not a nation, now, that is at war – ground wars in the Middle East.”

But to quote a tired cliché: The enemy gets a vote. In Iraq and Syria, U.S. troops still must contend with Iranian-backed militia groups such as Kata’ib Hezbollah and Kata’ib Sayyid al-Shuhada. After U.S. airstrikes against both groups in June, American troops in Syria and Iraq were attacked by rockets and drones several times. Two U.S. service members were injured in a July 7 attack on Al-Asad Air Base, Iraq.

Not only are U.S. forces still deployed to war zones as part of the sprawling and shadowy Global War on Terrorism, but they are facing increasingly elaborate threats. The fact that American troops are now coming under attack from drones has prompted the military to test new technology to allow service members to shoot down unmanned aircraft.

Back in May 2020, U.S. special operations troops at the Al Tanf garrison were shown in pictures using the SMASH 2000 fire control system at a target suspended from a small drone, but U.S. Special Operations Command ultimately decided not to field the system.

Meanwhile, the United States remains at war with terrorist organizations such as Al Qaeda and the Islamic State group, and their affiliates. Over the past 20 years, the Global War on Terrorism’s original battlefield of southwest Asia and the Middle East has expanded to include Africa, where U.S. troops are fighting quiet wars against groups such as al-Shabaab.

Four American soldiers were killed in October 2017 when they were ambushed by more than 100 ISIS fighters near the village of Tongo Tongo in Niger. Then in January 2020, al-Shabaab fighters attacked a military base at Manda Bay, Kenya, killing a U.S. soldier and two American defense contractors.

U.S. Africa Command later claimed that it had killed the al-Shabaab leader in charge of multiple attacks in Kenya along with his wife in an airstrike in Somalia.

As the most recent attack on U.S. troops in Syria shows, the Global War on Terrorism and its associated mission creep continues unabated. Biden’s pledge to end the Forever Wars remains unfulfilled.