CNN reporter Barbara Starr confirmed on Sunday that the embassy had been struck by three rockets. Iraq's former foreign minister Hoshyar Zebari tweeted that one of the rockets hit the embassy's dining facility. 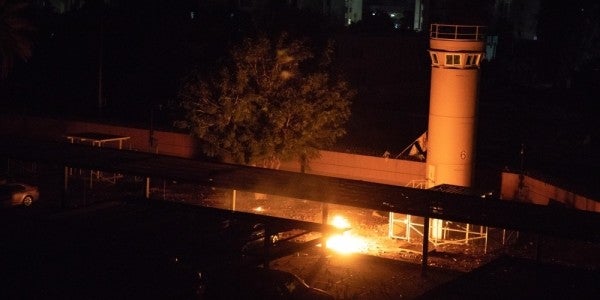 No information was available on whether the injured person was a U.S. service member or a civilian assigned to the embassy.

CNN reporter Barbara Starr confirmed on Sunday that the embassy had been struck by three rockets. Iraq's former foreign minister Hoshyar Zebari tweeted that one of the rockets hit the embassy's dining facility.

The compound of #USEmbassy in #Baghdad received a direct rockets hit by unruly militia. The Embassy restaurant or canteen was damaged and burned. This is a very dangerous game by #PMF uncontrolled factions to galvanize the tense situation. It must stop.

Military officials in Iraq referred all questions to the State Department, which provided a statement that did not say whether the embassy had been hit at all.

“We are aware of reports of rockets landing in the International Zone,” a State Department spokesperson said. “We call on the Government of Iraq to fulfill its obligations to protect our diplomatic facilities.”

It was not immediately clear who was responsible for Sunday's attack.

The majority of attacks against U.S. troops in Iraq are being carried out by Shiite militia groups, some of which are controlled by Iran, according to Air Force Maj. Gen. Alex Grynkewich, the deputy commander for operations and intelligence for U.S. troops in Iraq and Syria.

“In the time that I have been in Iraq, we've taken a couple of casualties from ISIS fighting on the ground, but most of the attacks have come from those Shia militia groups, who are launching rockets at our bases and frankly just trying to kill someone to make a point,” Grynkewich told reporters on Jan. 22.

While he had not seen an increase in attacks by Shiite militia fighters in retaliation for the U.S. airstrike that killed Iranian Maj. Gen. Qasem Soleimani, Grynkewich also said he expects U.S. personnel to continue to come under “harassing fire.”