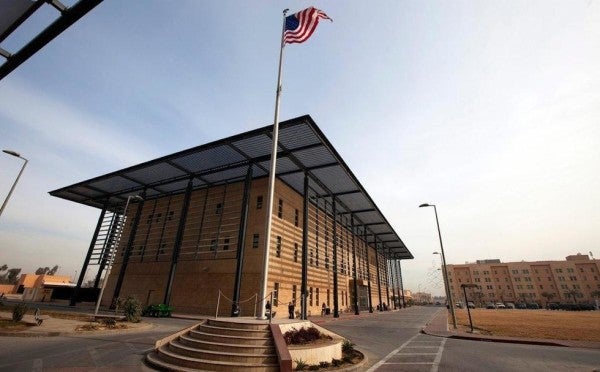 BAGHDAD (Reuters) – A rocket was fired in Iraqi capital Baghdad's heavily-fortified Green Zone, which houses government buildings and foreign embassies, but caused no casualties, the Iraqi military said on Sunday.

“A Katyusha rocket fell in the middle of the Green Zone without causing any losses, details to come later,” the military said in a brief statement.

The Katyusha multiple rocket launcher is an inexpensive type of rocket artillery that can deliver explosives to a target quicker than conventional artillery, but is less accurate.

Police special forces found a rocket launcher in al-Sina'a district in eastern Baghdad and have sealed off the area, a police source told Reuters. An ordinance disposal team from the Baghdad Operations Command was on its way to inspect it, he said.

Police were searching for suspects in the area, he said, adding that the U.S. embassy was not hit by the rocket.

The embassy in Baghdad and the U.S. consulate in the Iraqi Kurdish regional capital Erbil evacuated non-emergency staff this week.

President Donald Trump's administration has said it sent additional forces to the region to counter what it called credible threats from Iran against U.S. interests, including from militias it supports in Iraq.

Iran and the United States have both said they do not want war as tensions between them increase.