Over the past three days, nationwide protests over unemployment, corruption and public services have left 18 people dead and over 600 wounded 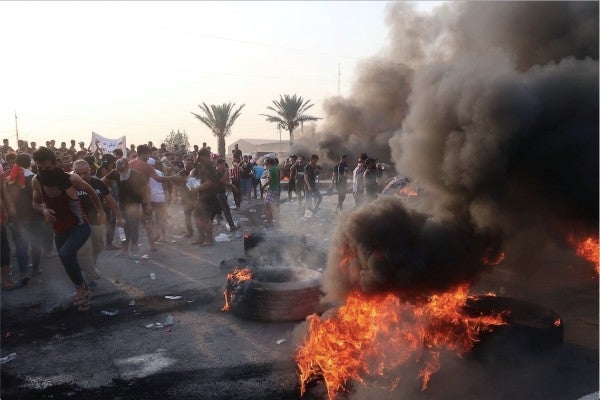 The death toll from mass protests in Iraq against corruption and unemployment has risen to 18 as turmoil spreads to the south of the country.

Iraqis took to the streets for a third day on October 3 despite local curfews and police using tear gas and even live fire, in the biggest challenge yet to Prime Minister Adel Abdel Mahdi's government.

Authorities ordered a ban on all movement across the capital starting at 5 a.m., but dozens of protesters defied the order and gathered in Baghdad's Tahrir Square.

The rallies started in Baghdad on October 1, but have since spread to cities across the mainly Shi'ite south.

Medics and security sources said four protesters were shot dead in the southern city of Amarah and another in the province of Dhi Qar.

The new killings bring the overall toll from three days of protests to 18, including one police officer. More than 600 protesters and security personnel have been wounded, according to medical sources.

Tensions have been amplified by a near-total Internet blackout, the closure of government offices in Baghdad, and calls by firebrand Shi'ite cleric Muqtada al-Sadr for “a general strike.”

A double blast hit the Green Zone before dawn on October 3, security sources said. Embassies and some ministries are located in the heavily fortified Green Zone, which was struck by two rockets last week.

The apparent attack came hours after the authorities sealed off the Green Zone “until further notice,” out of concerns that angry protesters would overrun it.

In Kut, a city some 160 kilometers southeast of Baghdad, two demonstrators were killed overnight after they tried to storm a local government office, medics and security sources said.

Two more protesters were killed in Nasiriyah, some 350 kilometers south of Baghdad, which has so far seen the deadliest rallies with a total of eight protesters and one police officer killed.

Riot police have used water cannons, tear gas, rubber bullets, and live ammunition in an attempt to force protesters away from main squares or government buildings.

With Internet access virtually shut off, protesters have had difficulties communicating with each other or posting footage of the latest clashes.